Milky way over Tunnel View taken around 3:00am. You can see the core way over, with a seasonal waterfall flowing directly below

Ever since my first visit to Eagle Peak, I’ve longed to return to properly shoot sunrise and sunset. When I got into astrophotography, it quickly donned on me that it would also be a great place to shoot the milky way from. After a couple unsuccessful attempts, I decided to make a push for it this past March. With a historic winter, I could only image the hiking conditions that awaited me, especially because when I went to Yosemite Falls in February, there was still a few feet of snow just past the trail head. The plan was to leave Los Angeles on Friday after work, get to Yosemite at about 10:00pm, get on the trail at 11:00pm, shoot the milky way from Columbia Rock (where I would also meet my friend who had my backpacking permit) and then continue on up to just past Yosemite Falls where I would camp for the night, and then continue on to Eagle Peak the next day. As always, this one went south fast but recovered quite nicely.

Failure From the Start

After working all day, I left Los Angeles later than expected and finally got to Yosemite around 11:00pm. I threw my pack together as quick as possible, and finally got on the trail about 11:45pm. As soon as I hit the trail, I immediately regretted my decision, as my tired body could barely make it up along the first set of switchbacks. But I dug deep and with motivation from great weather, I continued to press on. All the while, I hoped my friend was still at Columbia Rock, as I was later than expected. However, knowing the core did not rise until 1:00am, I thought he would be there until at least then, and I’d catch him leaving if anything. Finally, just around 1:00am I made it to Columbia Rock, and to my surprise, I was all alone – at this point, I got reception for the first time and received a message from my friend that he had left early around 11:00pm. Because he had my permit, I had to turn around and wait till I could get it the next day and head back up. Needless to say, I was disappointed, tired and hungry with a sugar induced headache, and the last thing I felt like doing was taking any pictures. However, a funny thing happened – I looked up across the valley and saw the milky way shining bright and I quickly remembered why I came out here in the first place: to shoot the milky way in new locations. So I pulled out my camera, shot till about 2:00am and then headed back down to camp 4. With a newfound energy, I ended up driving around the valley and shooting the milky way, ended up at Tunnel View around 3:00am. Finally calling it quits around 4:00am, I got a few hours rest before having to get up at 7:00am to get a permit and hit the trail…again. 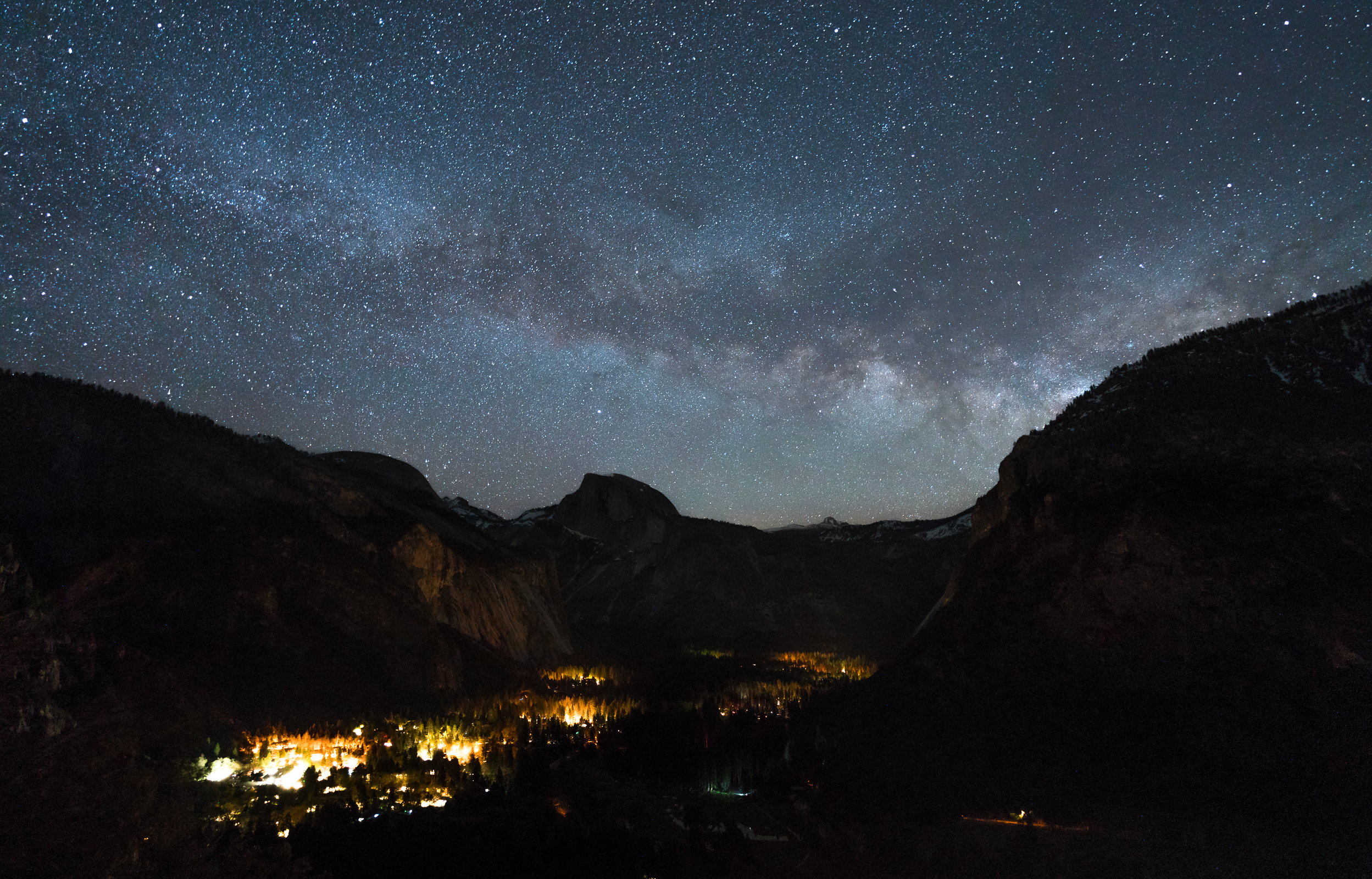 The next morning was a rough one. On just a few hours of sleep, I made my way to the wilderness permit office and got in line just as a whole group of people poured in – pretty surprising how many backpackers were around this early in the season. After getting my education on, my permit was secured. I made one final stop at the store to grab breakfast and returned to Camp 4 to get on the trail for a second time. The first set of switchbacks were killer, once again (shocker), but I made a fairly good pace until Columbia Rock at which point I took a quick snack break. Although tired, I was making good pace at this time so didn’t feel a big need to rush on. Being on a solo backpacking trip for the first time, I would be lying if the trek to Eagle Peak wasn’t on my mind the entire way up. The Upper Yosemite Falls trail is heavily trafficked, but once you get to the top, it thins out very quickly to little to no-one. Along the way up, I spotted other backpackers who were coming down and inquired about the conditions – most did not go very far past Yosemite Falls, and the one that did, could not find the trail to Eagle Peak and turned around. This was not what I wanted to hear.

As the day went on and I continued my slow ascent, I began to doubt whether or not I’d actually make it all the way to Eagle Peak, making contingency plans in my head for Yosemite Point instead – A beautiful spot in its own respect, but not exactly what I was after. Finally, around 2:00pm I reached Yosemite Falls and enjoyed a well deserved lunch. When I got there I spotted some climbers coming from El Capitan and asked them how the conditions were; they assured me there was some sort of foot trail to follow and minimal route finding was necessary, but that it was definitely super snowy back there with flooded meadows. Not truly feeling assured of my skills to hit this trek by myself, I stretched my break to enjoy a little more protein and mentally prepare myself for the trek. Right when I was about to hit the trail, I noticed a couple backpackers making their way up and kind of looking around, unsure of their next move. Immediately, I thought they had to be going to Eagle Peak – after all, if you weren’t going to Yosemite Falls, the only other real place to go at this time of the year is in the direction of Eagle Peak and El Capitan. I walked over and introduced myself, inquiring to where they were going. Thankfully I didn’t scare them off, and soon enough, we decided to make the trek out to Eagle Peak together. 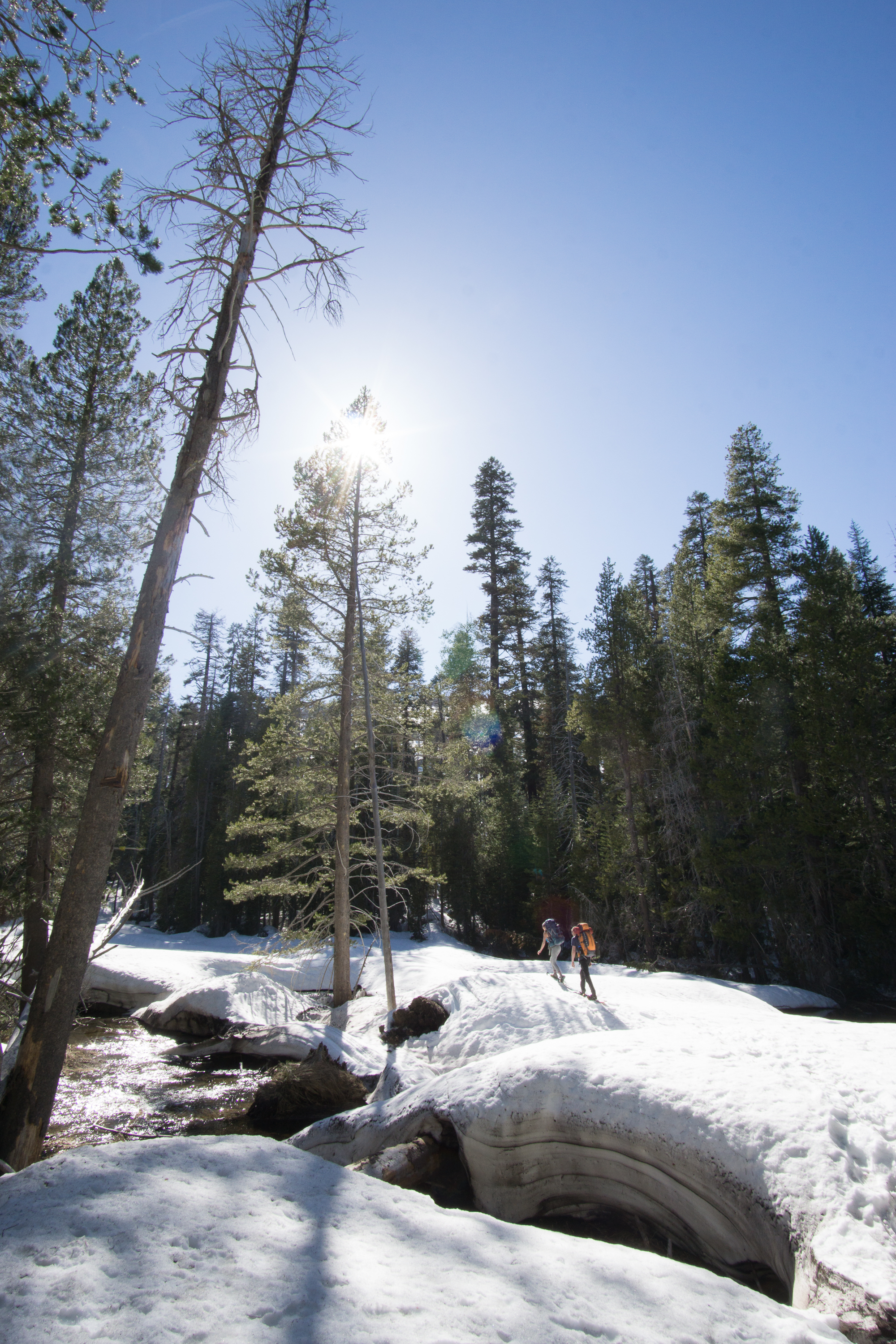 The trail quickly went from wooded forest to hard packed snow within a couple hundred feet. Soon enough, what was a flat walk before turned into a gradual climb up a high snowbank; now I understood why that one person couldn’t find the sign – it was under 10 feet of snow. We continued along until we reached Yosemite Meadows, which was covered in snow with rivers cutting through them. At first, we followed some steps out to a snowbank and it seemed as if we had to cross through the stream. After stepping through some ice, we realized this wasn’t the right way and turned back. We found another way through the meadow and continued navigating a snowfield fill with river crossings, with water raging 5 feet below. This was extremely slow going for me without snow shoes – my new friends had them and they were definitely better off. For every step I took I sunk in about a foot. At one point, the snow gave way and I fell forward with my pole still planted, snapping the pole. Eventually we reached the base of Eagle Peak and finished off the final climb which felt more like a death march up the peak. 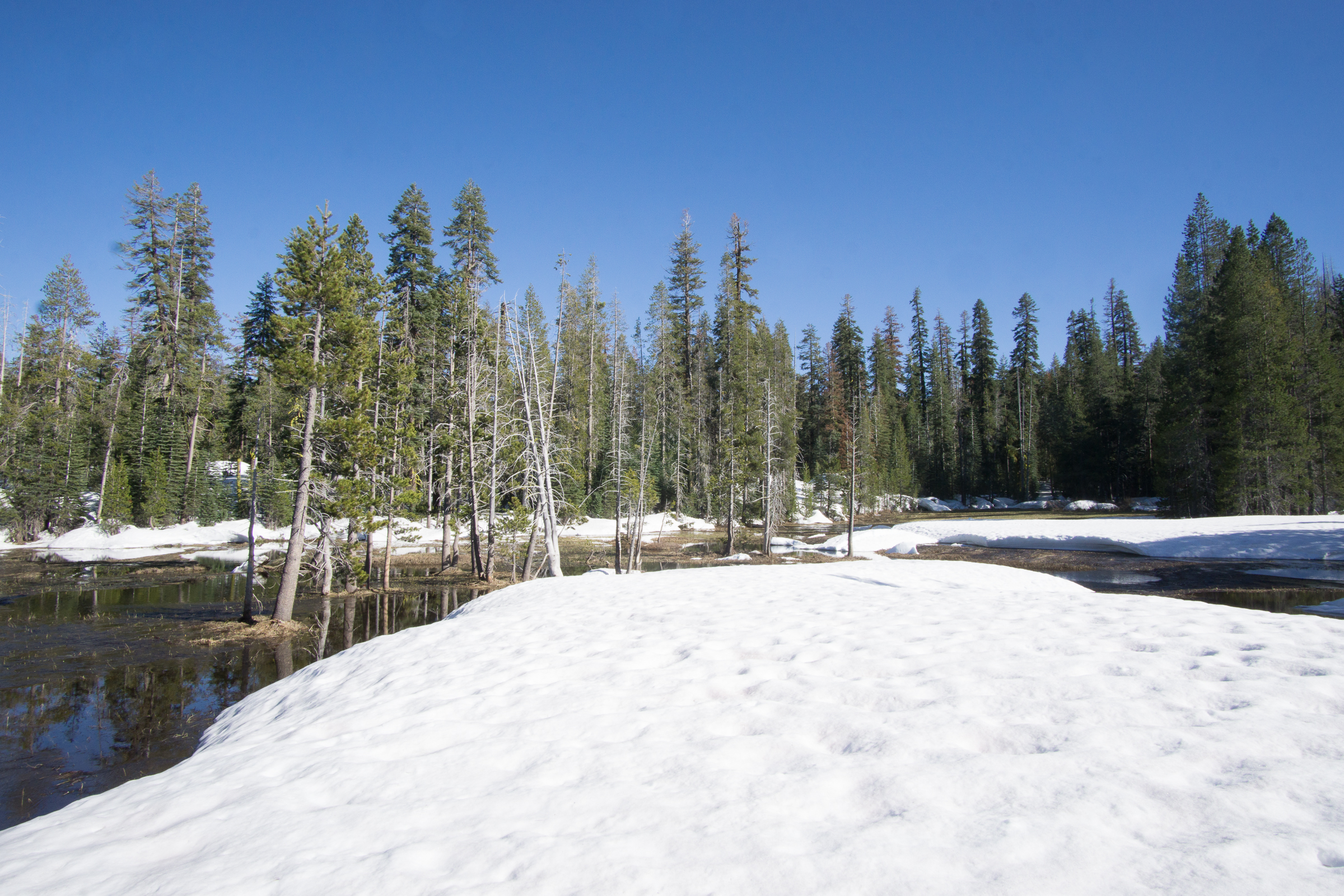 Once at the Peak, I remembered why this was such a special view to me. I used my shovel to clear out a space up-top and set-up a beautiful private palisade to call camp. I made some dinner and rested my tired bones after running around to shoot sunset. I set my alarm for 12:00pm, knowing the core didn’t come up till 1:00am. However, i was so tired, I could barely get out of bed and accidentally slept in till 12:45pm. Scrambling at this point, I ran outside and set-up as fast as I could. The sky was clear, the wind was minimal, and the temps weren’t too bad. I laughed hysterically, realizing that I had finally accomplished a two year dream. The next morning I packed up camp, took in the views one more time, and made the trip back, just thinking of how lucky I was that everything worked out in the end. 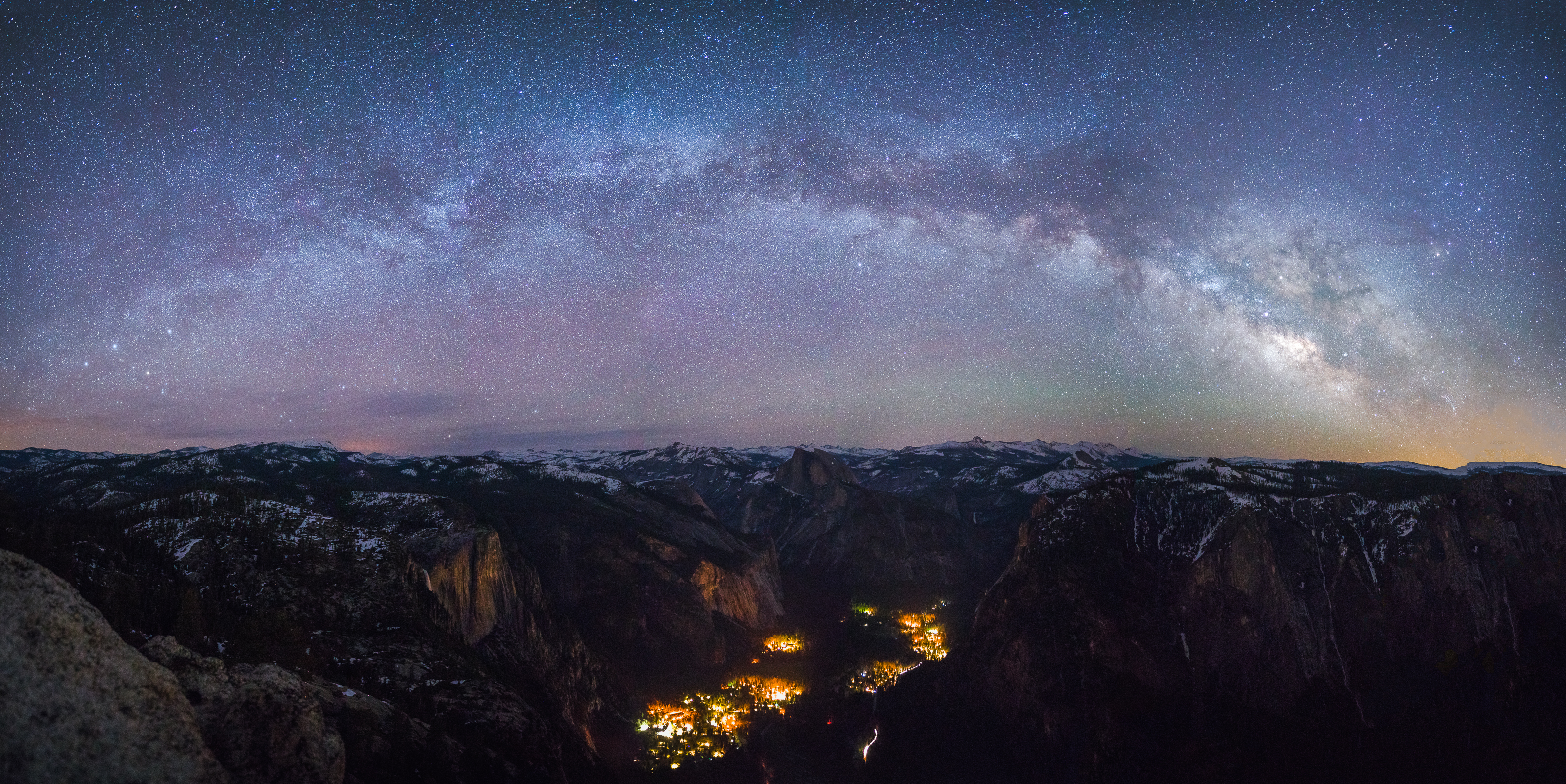 Milky way over Yosemite Valley as scene from Eagle Peak 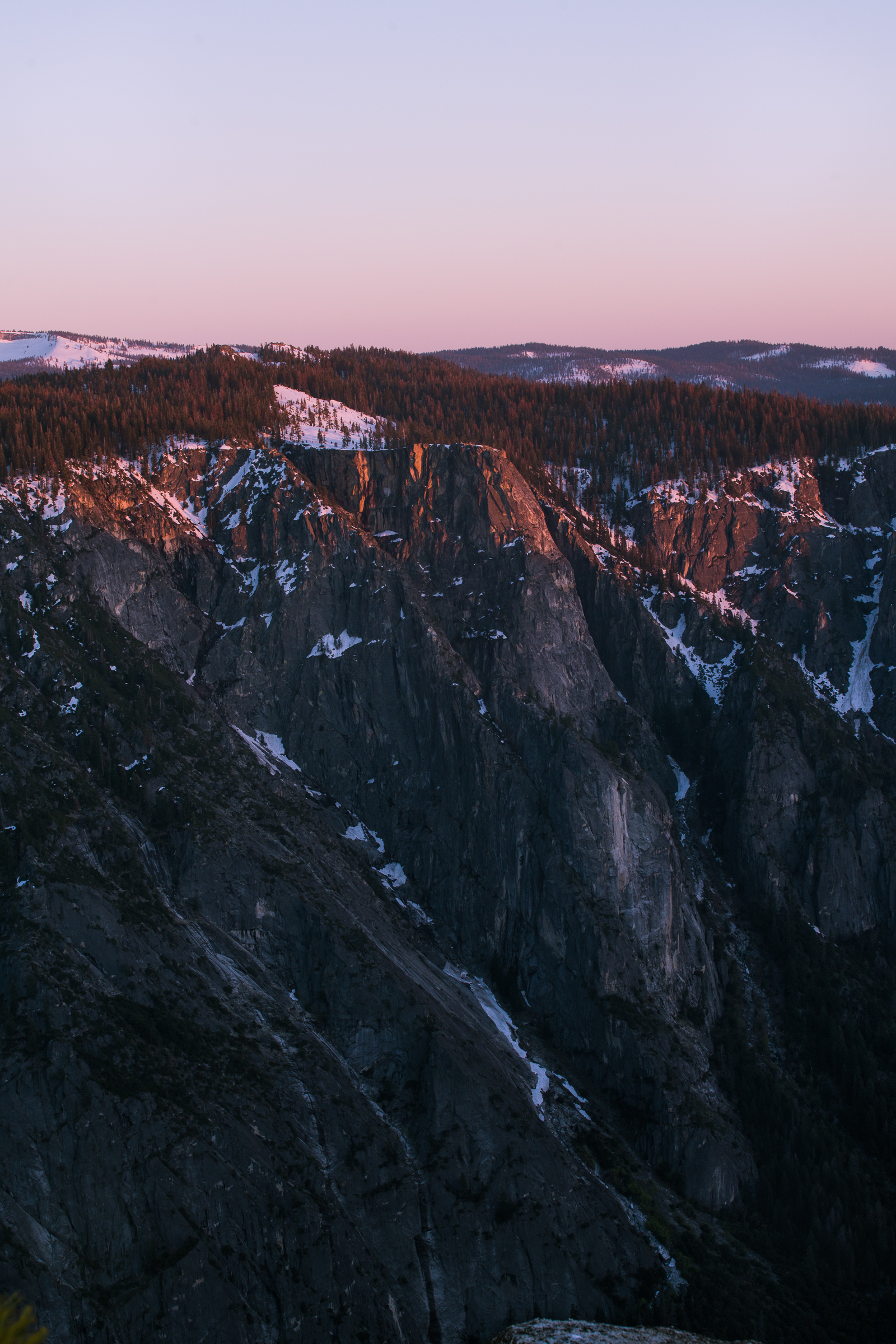 Alpen glow across the valley 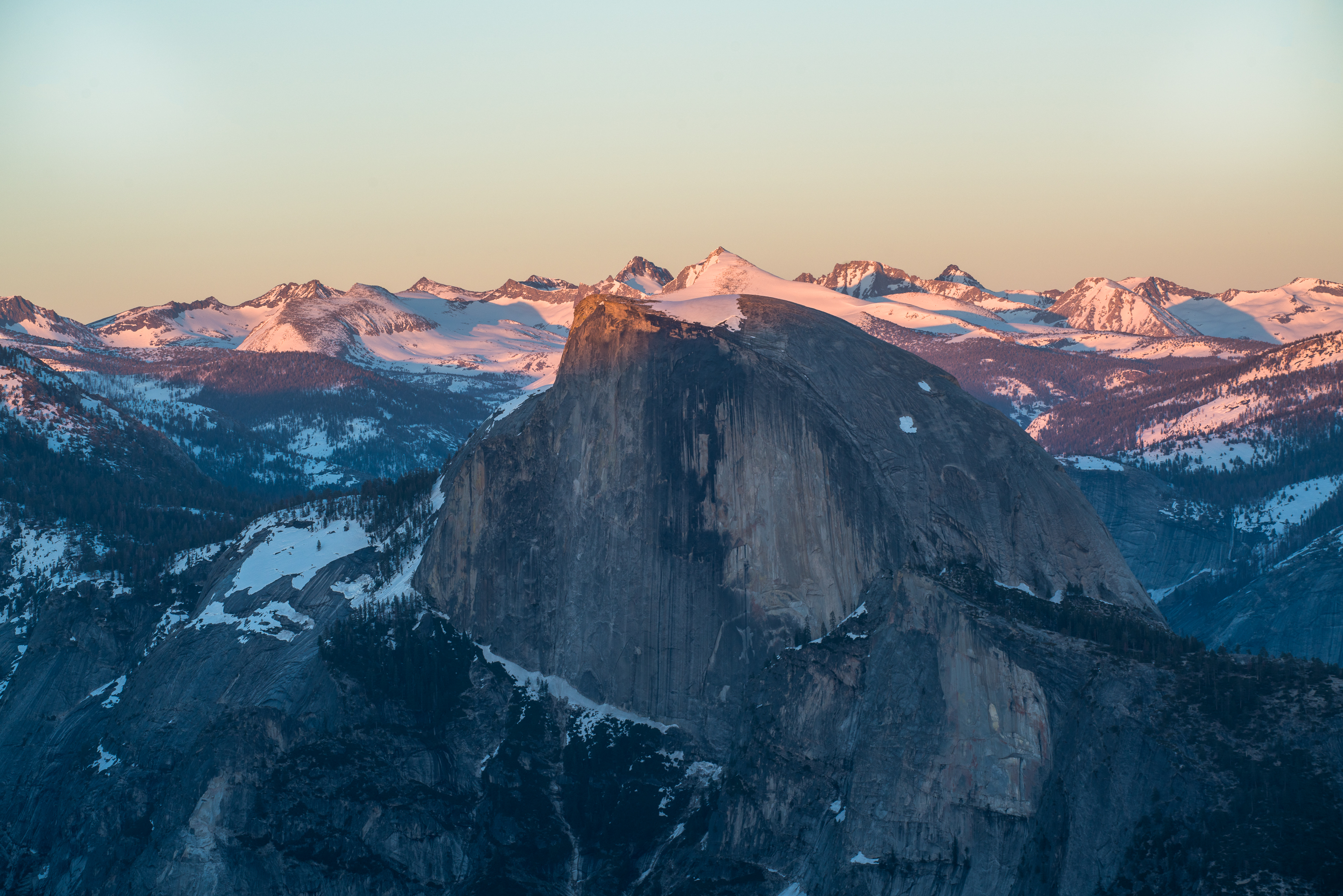 Last light on the Half Dome 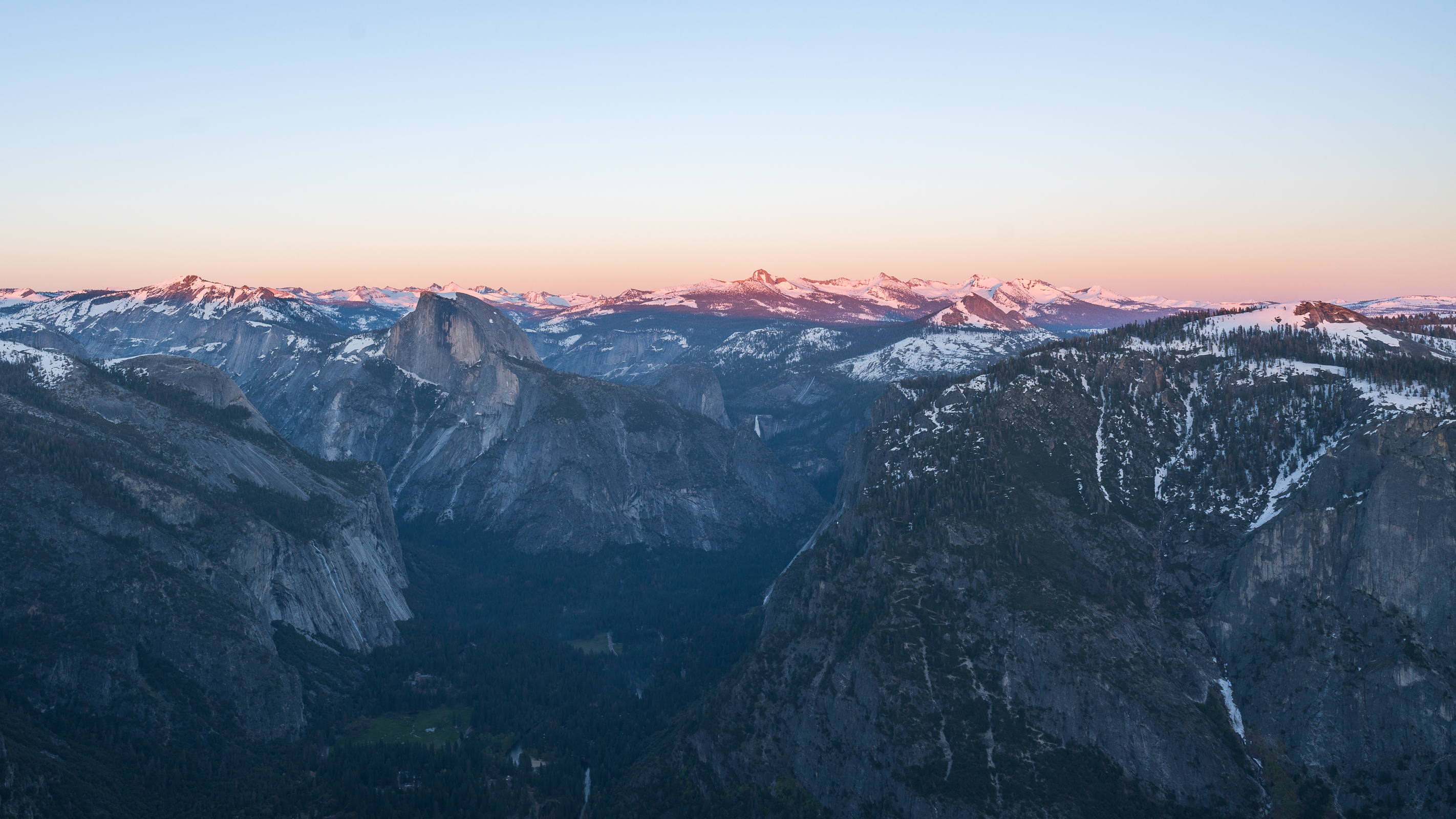 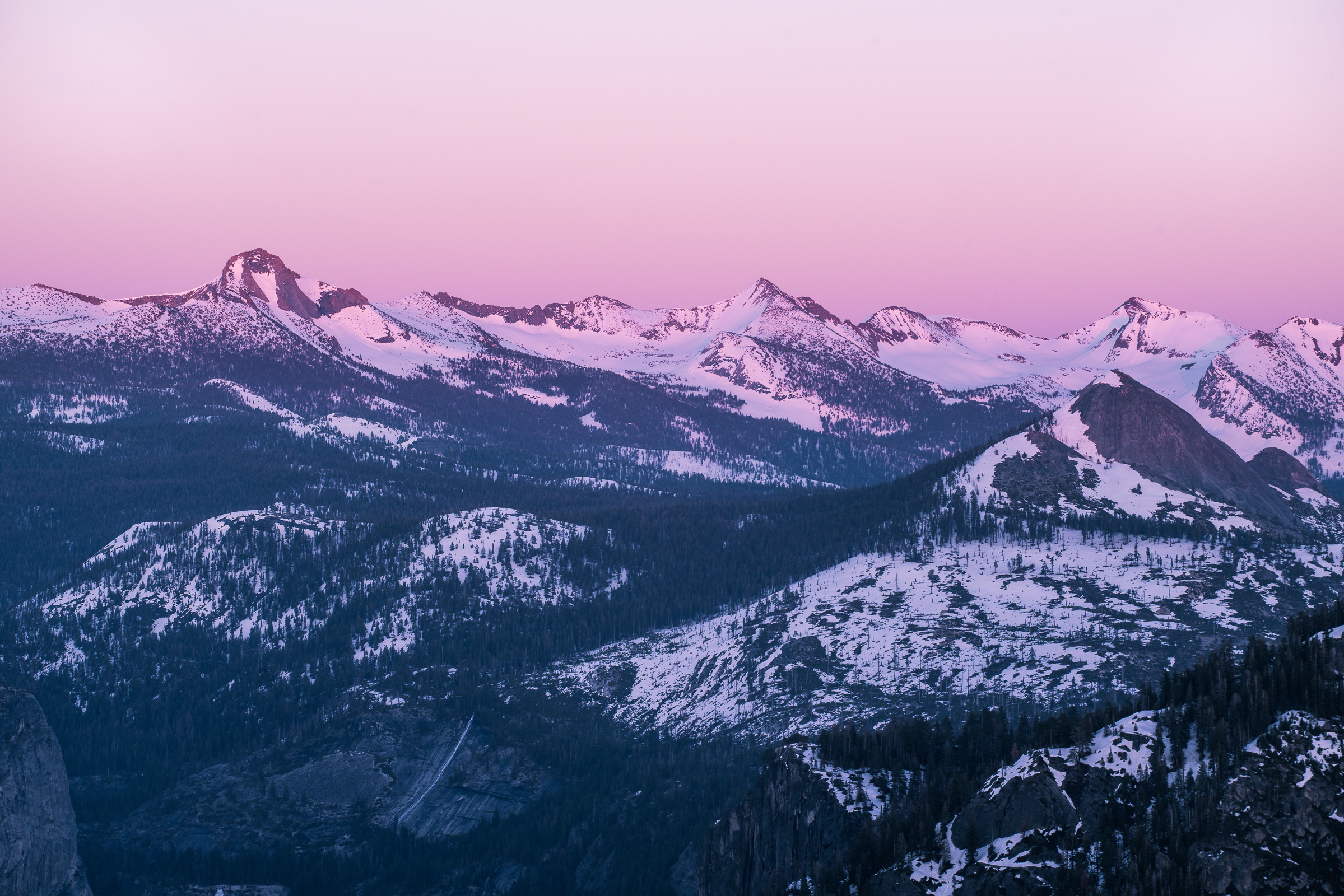 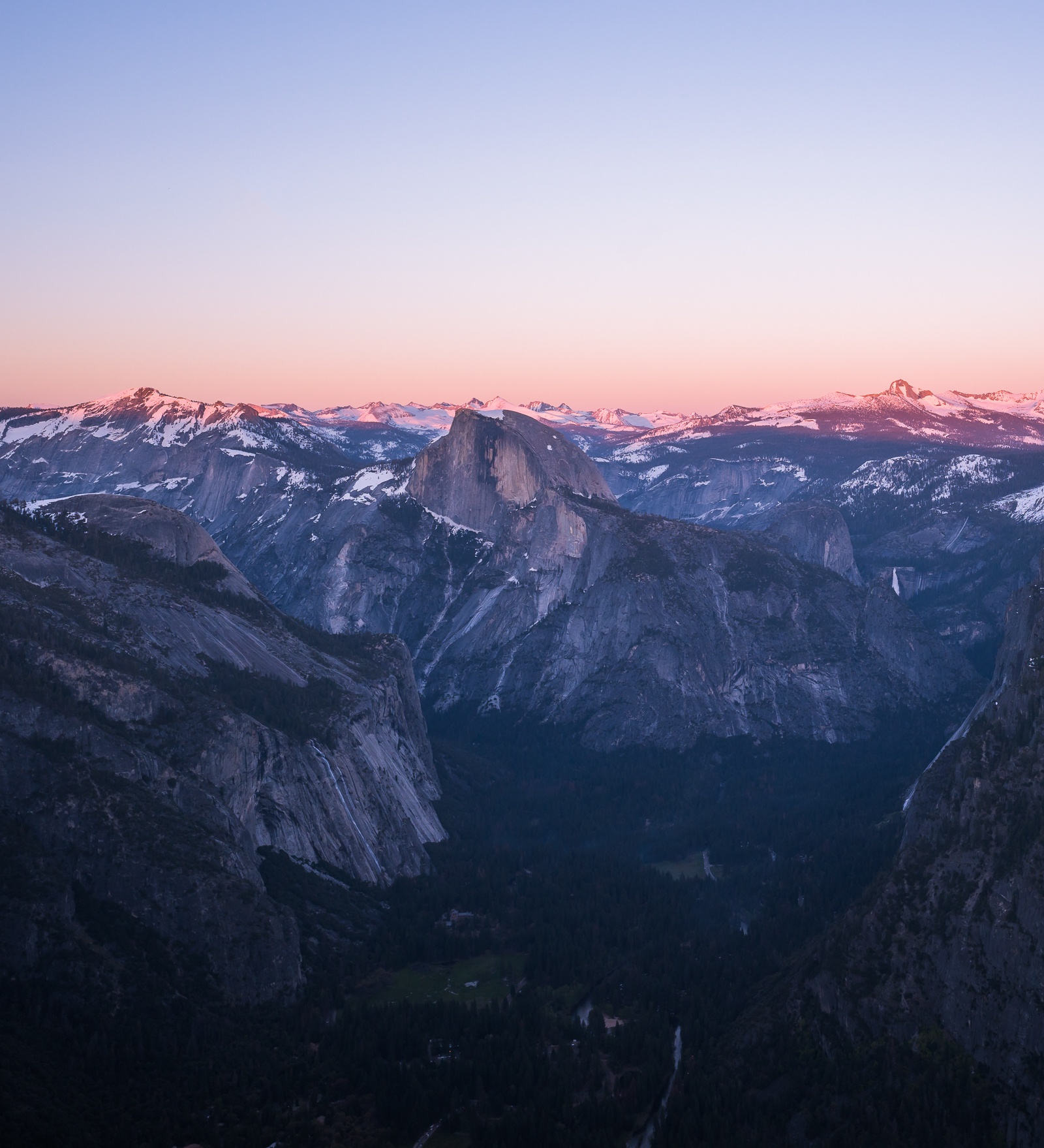 Sunset glow above Yosemite and the Eastern Sierras 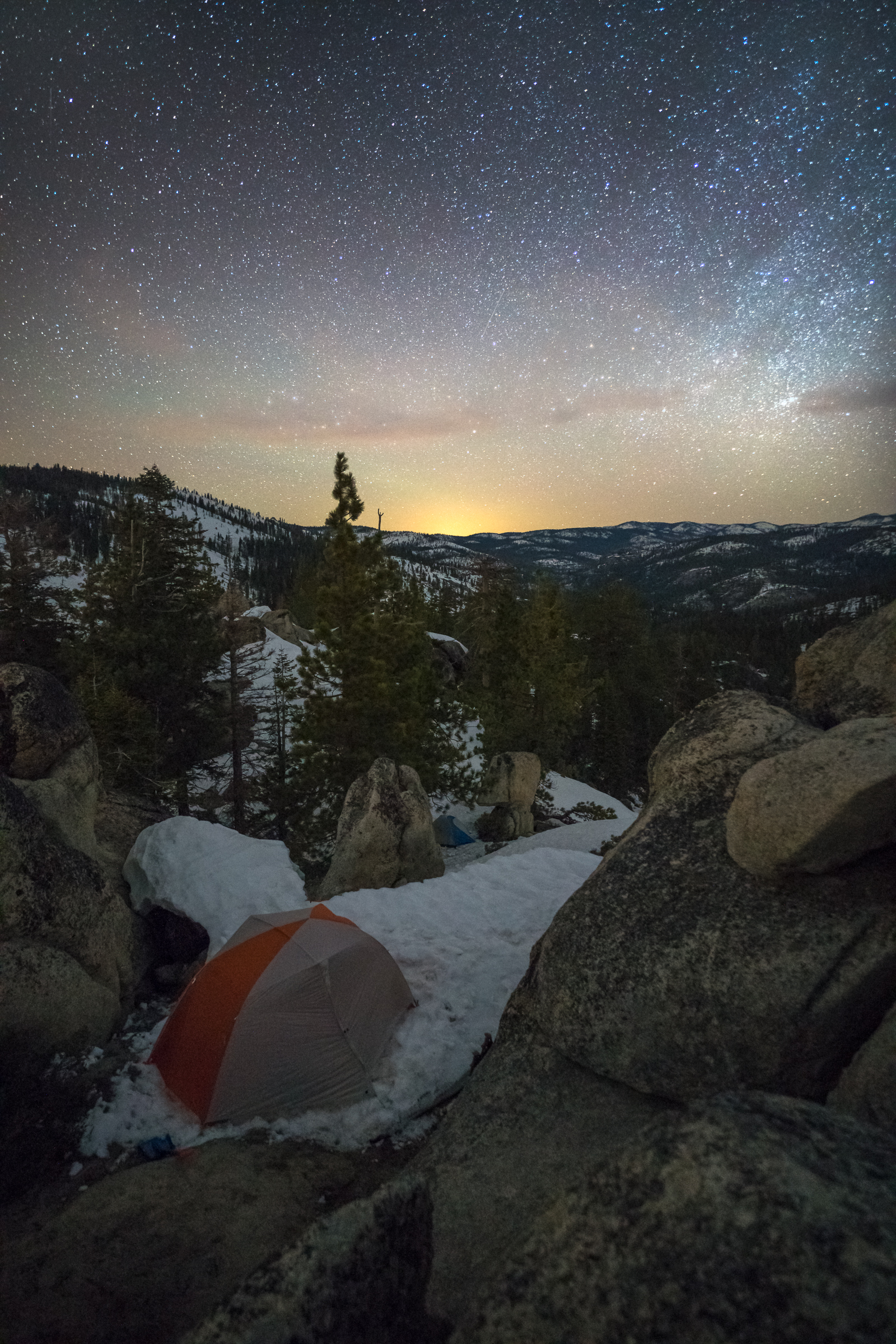 Campsite under the stars, with the tail of the milky way 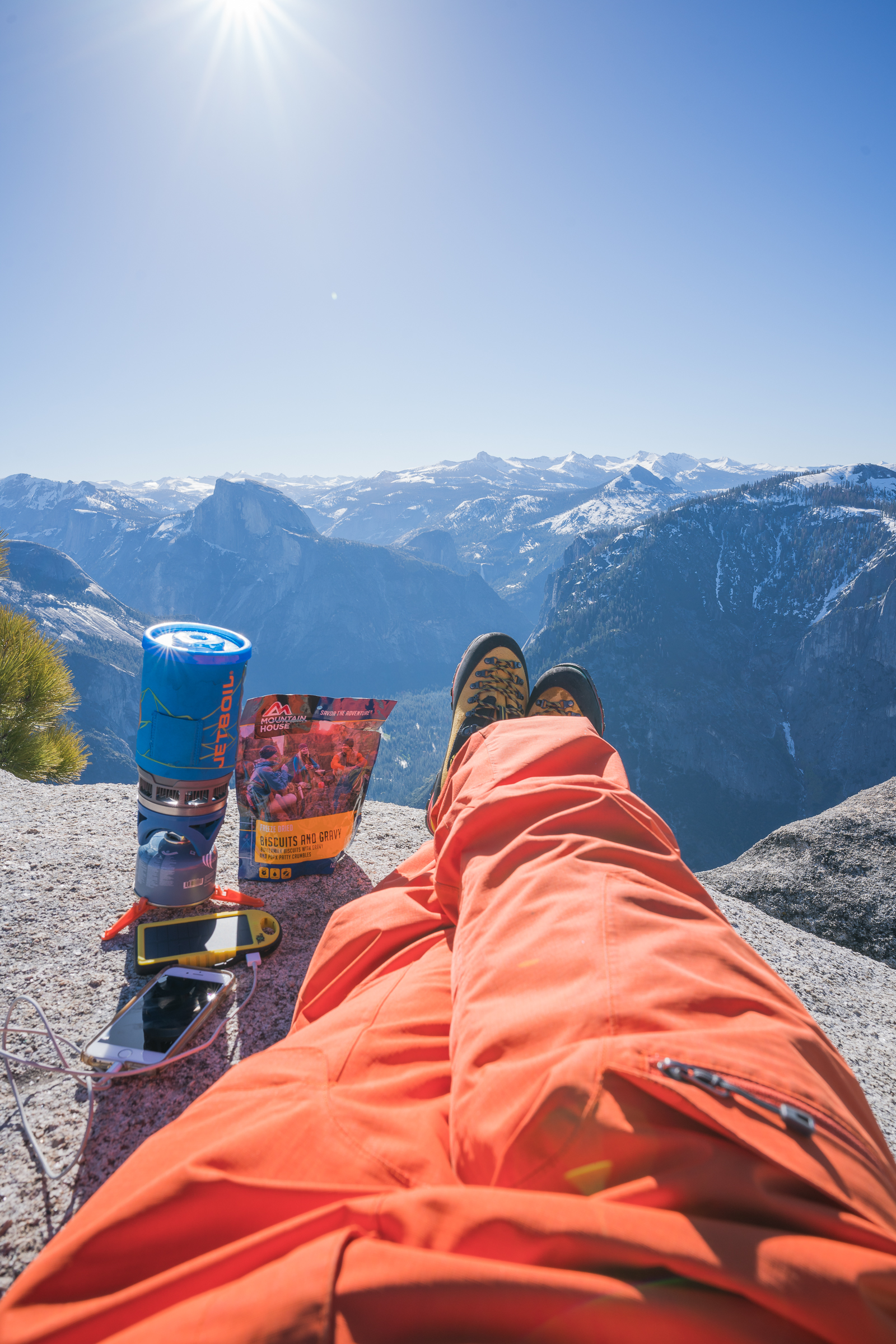 The morning breakfast spot to recharge 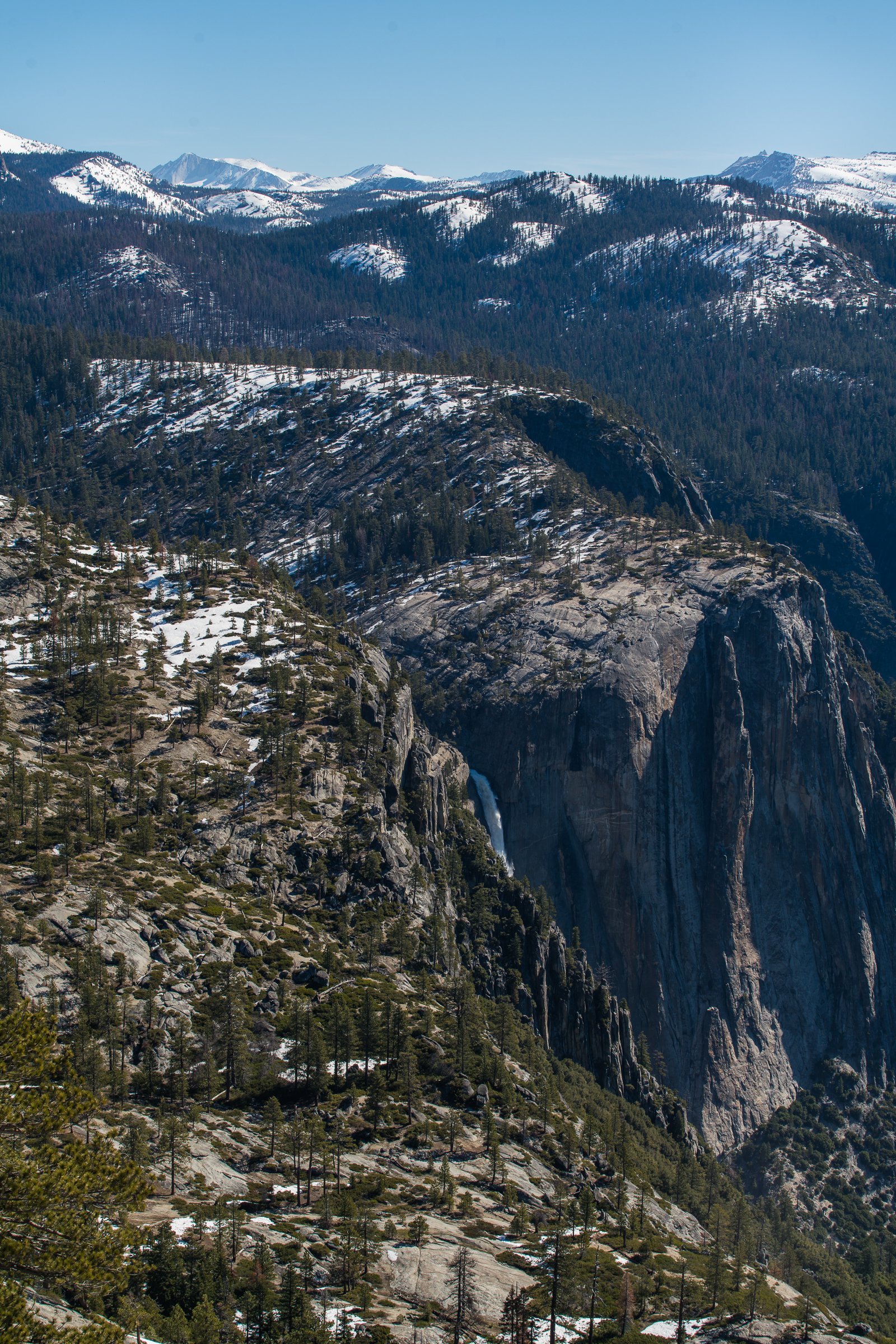 Close-up from of Yosemite Falls 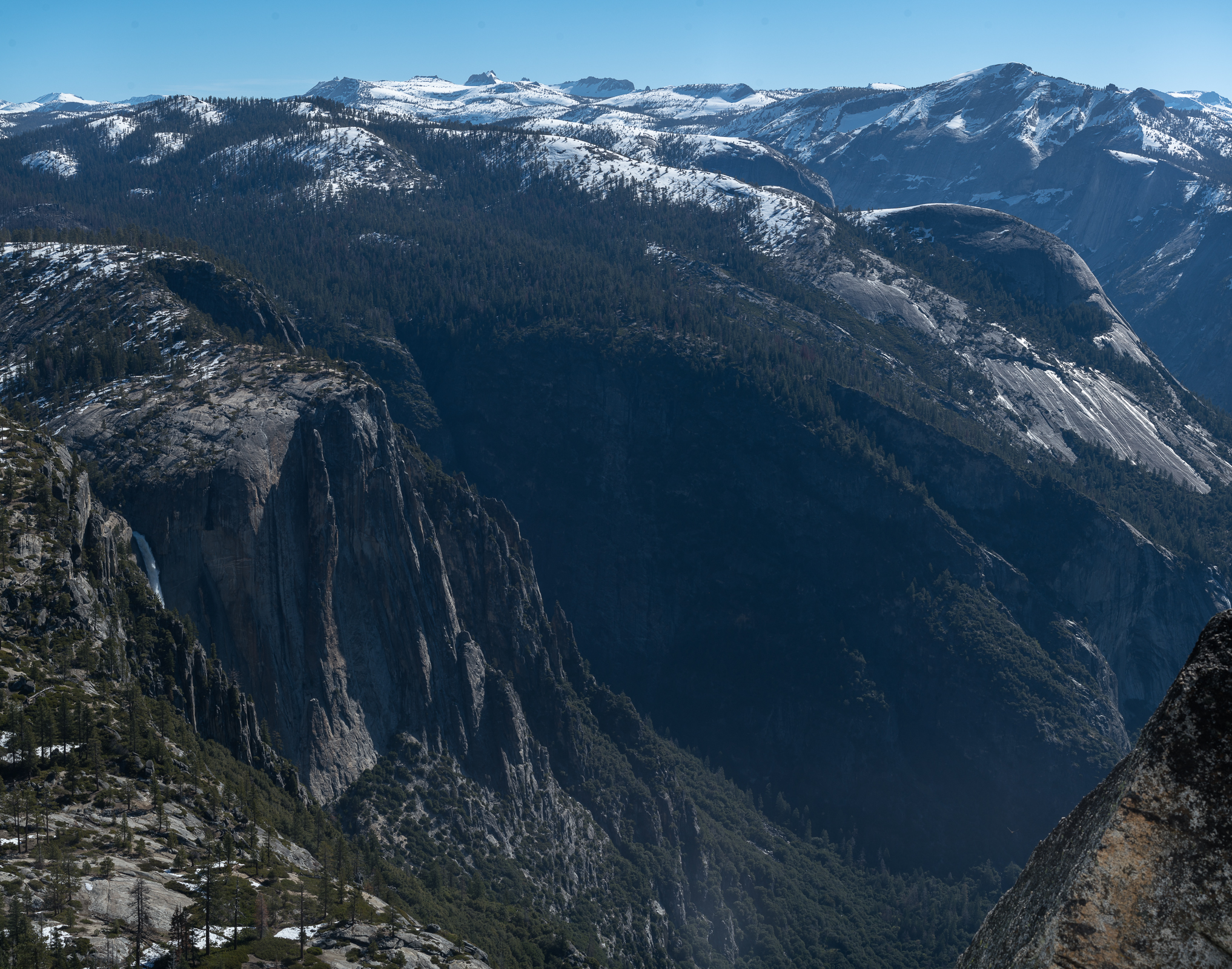 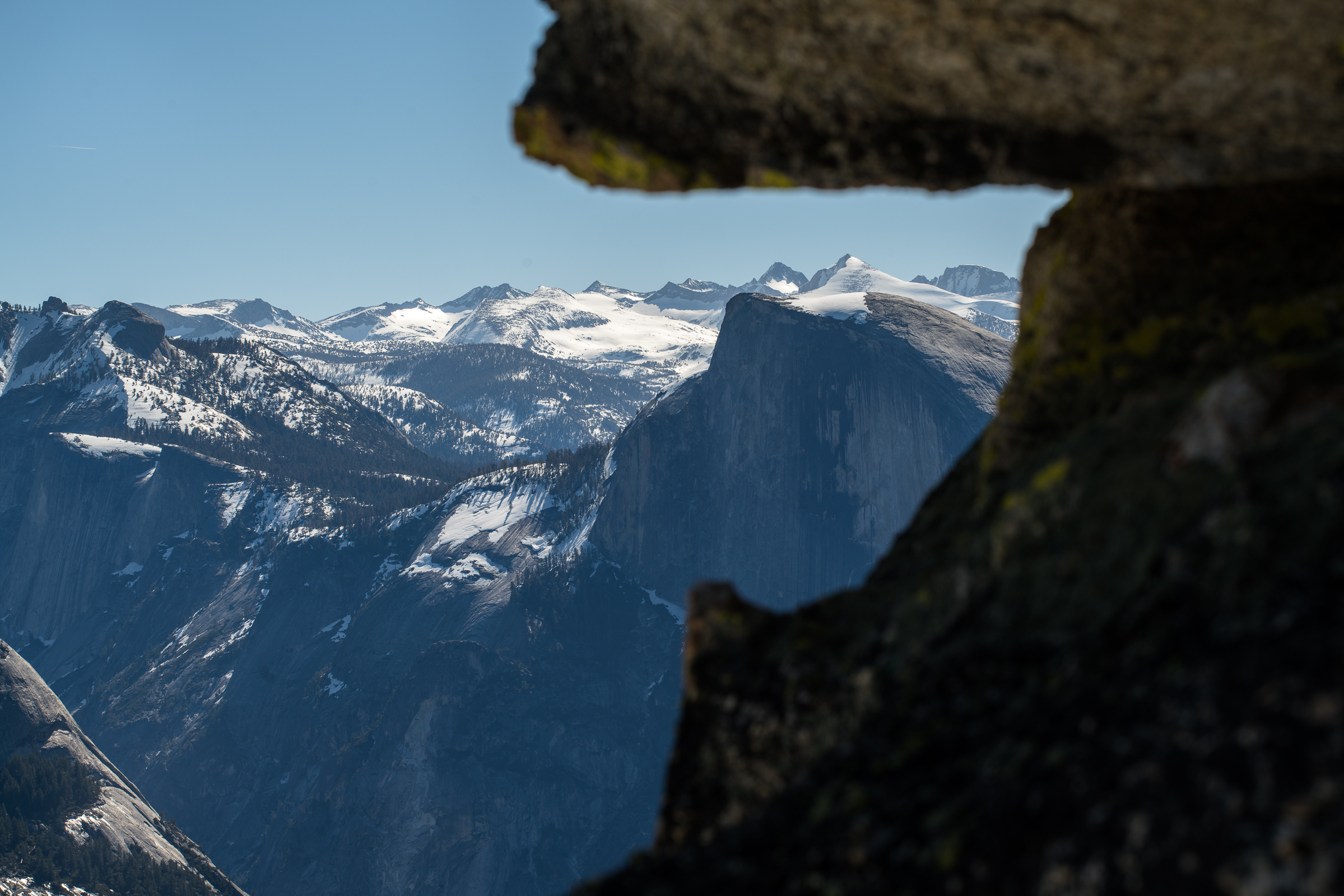 The other half of the apple