Skiing to Glacier Point in Winter

Yosemite in winter, especially after a fresh snow fall, is a beautiful sight to be seen. With a new found hobby in backcountry skiing and a record snowfall in Yosemite, I thought it would be a great time to cross a big item off of my bucket list – skiing out to Glacier Point during the winter. Little did I know, this big item would require a big time effort beyond anything I could have imagined.

The Calm Before the Storm

After a big January winter storm, the time was right. I convinced my friend Dan to come with; after all, it’s easy to find people who like to sleep in a tent while the temperature outside hovers in the single digits, never mind the 20+ mile ski that was ahead. The plan was simple: drive up to Yosemite Thursday, start skiing Friday by 9:00am and get to Glacier Point by 5:00pm just in time for sunset. We’d spend two nights there, venturing to other areas like Sentinel Dome, and then coming back Sunday. Everything started as planned – we rolled into the park about 5:00pm on Friday, made friends with some people at Camp 4, and hung out for a little before turning in. Unfortunately, this was pretty much the last time anything went as planned.

The next day we woke up, hurried to eat breakfast and made our way up to Badger Pass eager to get the day started. We thought not many people would be up there, given the conditions, but boy were we wrong. Seemed like once we pulled into the parking lot, everyone was gearing up to head out into the backcountry. Not only was everyone heading into the backcountry, but the amount of gear some people were carrying was mind boggling – box wine, huge drone bags (which are illegal in Yosemite), multiple snowboards. I went from thinking we were ahead of the game to all of a sudden thinking we were serious slackers. Talk about a kick in the confidence.

While Dan finished packing, I ran into the wilderness office to grab a permit and find out the conditions from the rangers, who were ever so kind to warn me that ski touring out to Glacier Point was a seriously daunting task and was much slower than taking cross country skis there. We finally got on trail around 11:00am and immediately realized how right the rangers were. You see, the main difference between using cross country skis and an alpine touring (AT) ski setup is that that the cross country skis typically have scales on the bottom that allow you to go uphill and downhill at a decently fast pace. With touring skis, your skins (or the fabric you attach to the bottom of the skis) allow you to go uphill, but no faster than if you were hiking. The added weight from the skis makes it actually much more tiring than hiking. Cross country skis are thinner, however, so their handling is much worse and they will sink in deep powder, so we needed the float from th AT skis to make it out to Taft Point and to otherwise ski a few areas, such as Sentinel Dome. 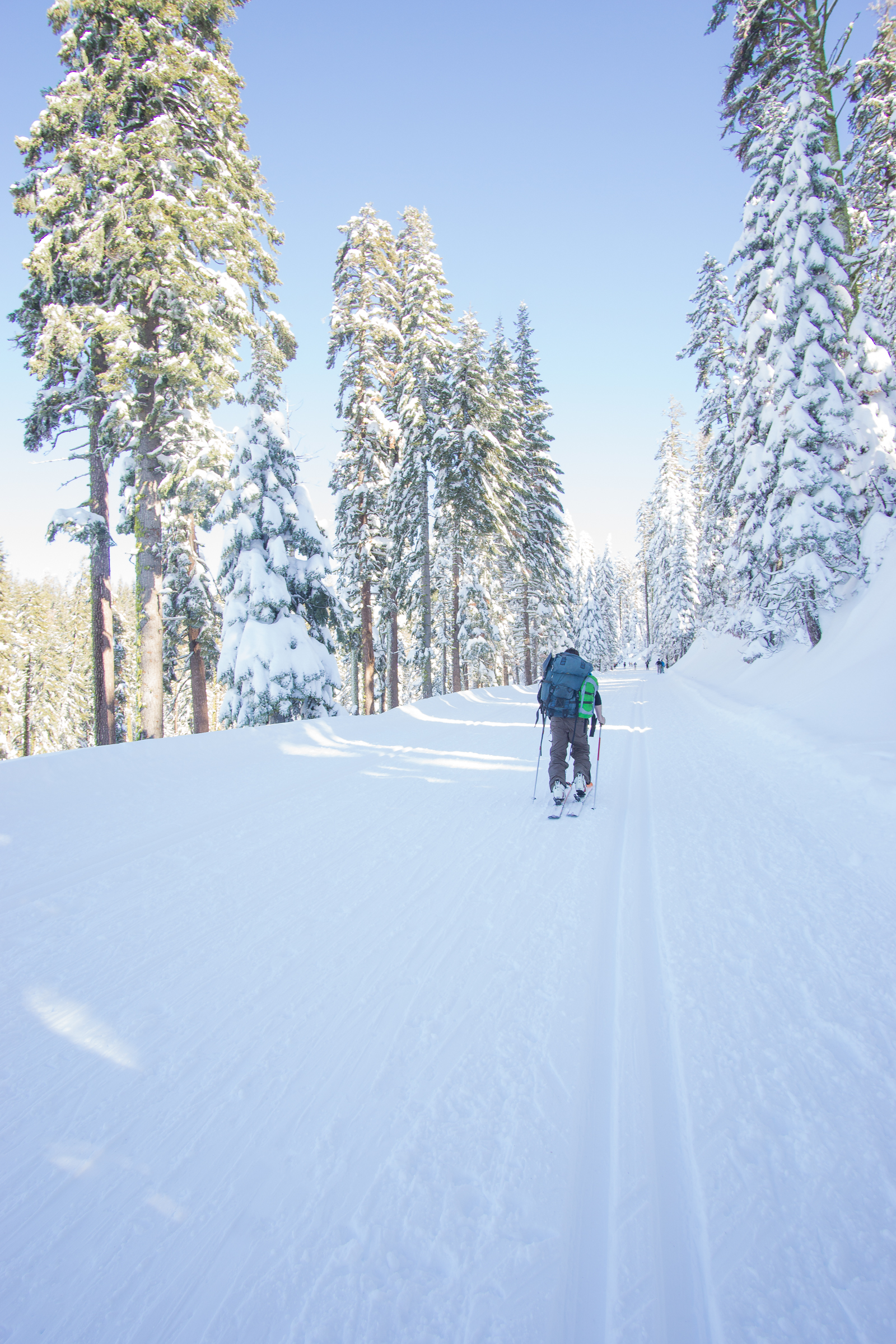 Off we go into the wild blue yonder

Not more than 15 minutes into our trek, I realized I forgot my tripod, out of all things. I had to go back for it, adding on an additional 30 minute delay. Once on the trail, the going was slow – much slower than we ever anticipated. While instant regret did set in, it was undeniable  how beautiful everything was – completely untouched and pristine meadows filled with snow, piles of snow clinging to the tree branches and the perfect weather to take this all in. This alone was our motivation to continue on.

After passing the turnoff for Dewey Point, we took off the skins and ski’ed the only downhill portion of the road we’d see until we get to the last mile before Glacier Point. Unfortunately, this was short lived, maybe 3/4 a mile at best, and then the real leg busting climb was on. The road gradually climbs uphill then about 5 miles in becomes much steeper for another 2-3 miles. Moving slowly, we quickly realized we weren’t going to make it to Glacier Point before sunset. As a back-up, I had hoped to at least make it to the rim for sunset, so Taft Point seemed like a good choice. Unfortunately, the sun was setting and it became even more obvious that we weren’t going to make it to Taft Point as we still weren’t even at the winter trailhead for it. Defeated, we saw a pristine meadow and decided to pull off trail and set-up camp. In actuality, this was a pretty awesome camp spot. After flattening out a camp spot, we climbed into our sleeping bags, made dinner, and shivered our way to bed. 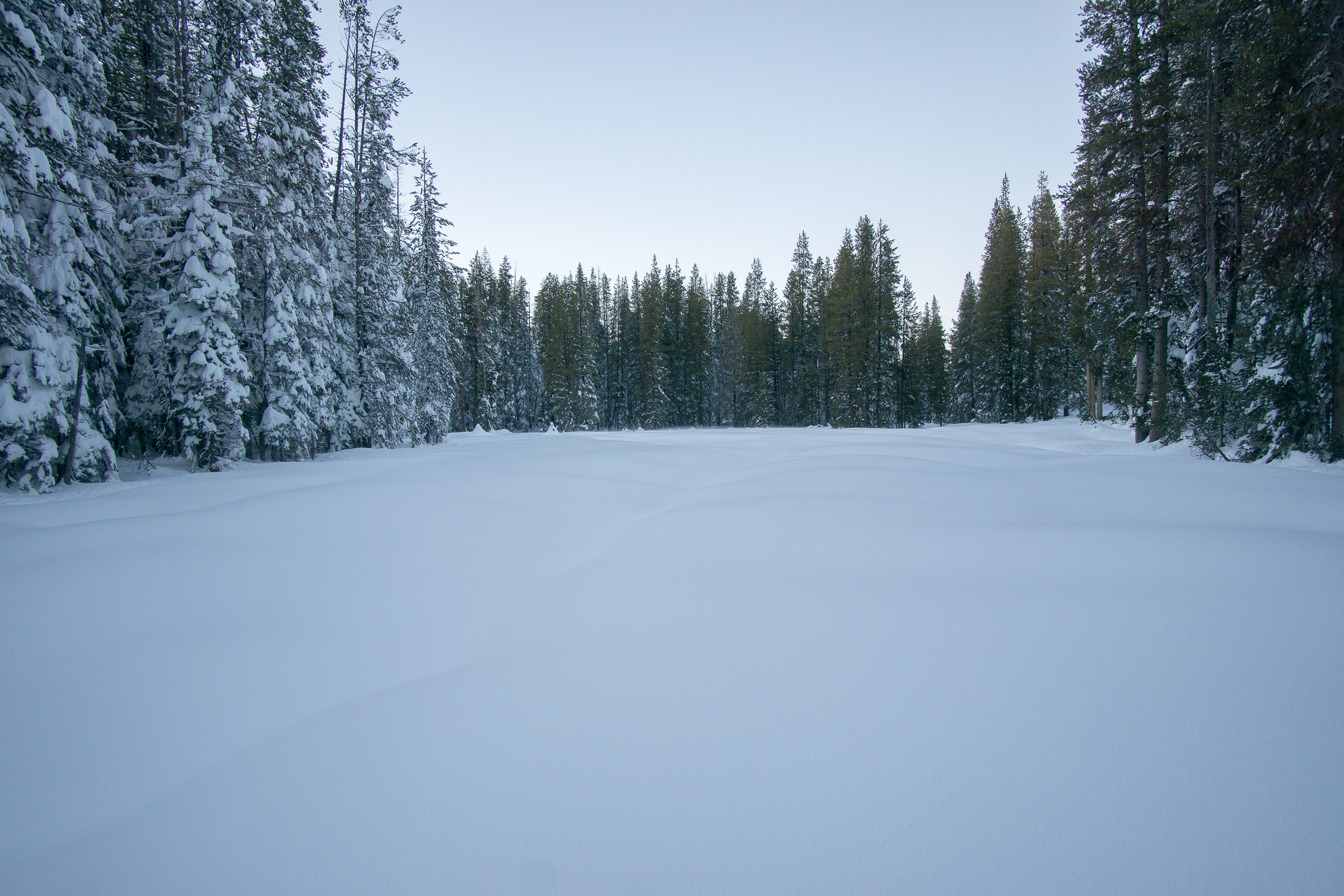 Blue hour over the meadows 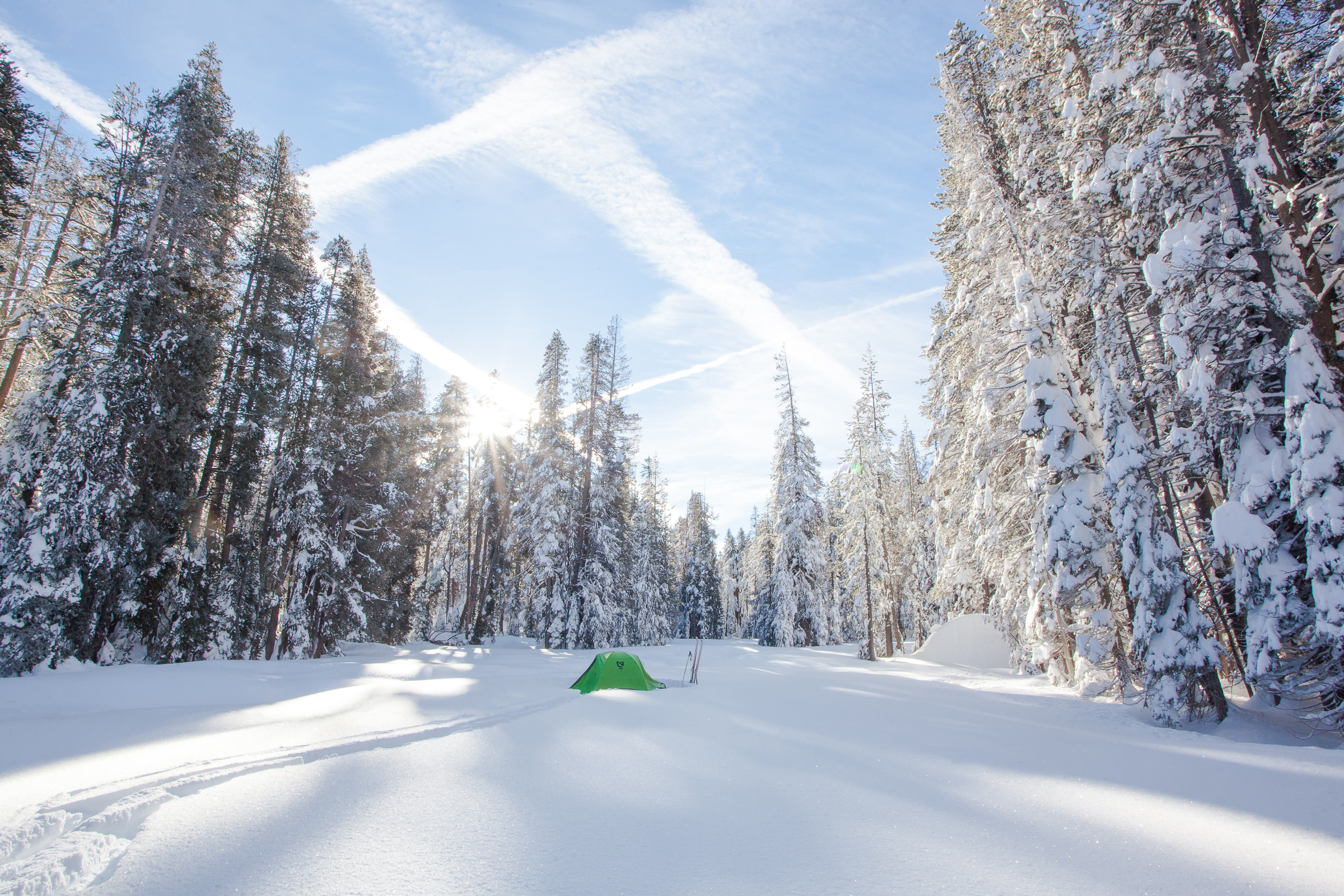 Snow camping at its finest

The next morning we woke up,  shook the frost off of our ski boots and melted a bunch of snow as our water bladders were all frozen solid. It was colder than expected, and my 3 season tent and 3 season sleeping bag didn’t hold up anywhere near as good as I thought they would, even when I wore all of the layers I brought. After shooting some early morning light, we ate breakfast, packed up and got back on trail. Not long thereafter, we came across the winter trail for Taft Point. We had our first issue of bad luck here, as Dan’s skins were not sticking properly. I used electrical tape I brought for my camera to tie his skins onto his skis. This was better, but still wasn’t that great. I pressed on to Taft Point and he came slowly behind. After some route finding and stream crossings, I cleared the trees and Taft Point was in my view for the first time. I dropped down the hill and skied all the way up to the railing, which was barely sticking out through the snow (in summer, it is chest high…). After shooting, I started to head back and Dan was just arriving. We took a couple baby laps down the hill and headed back to the trail. 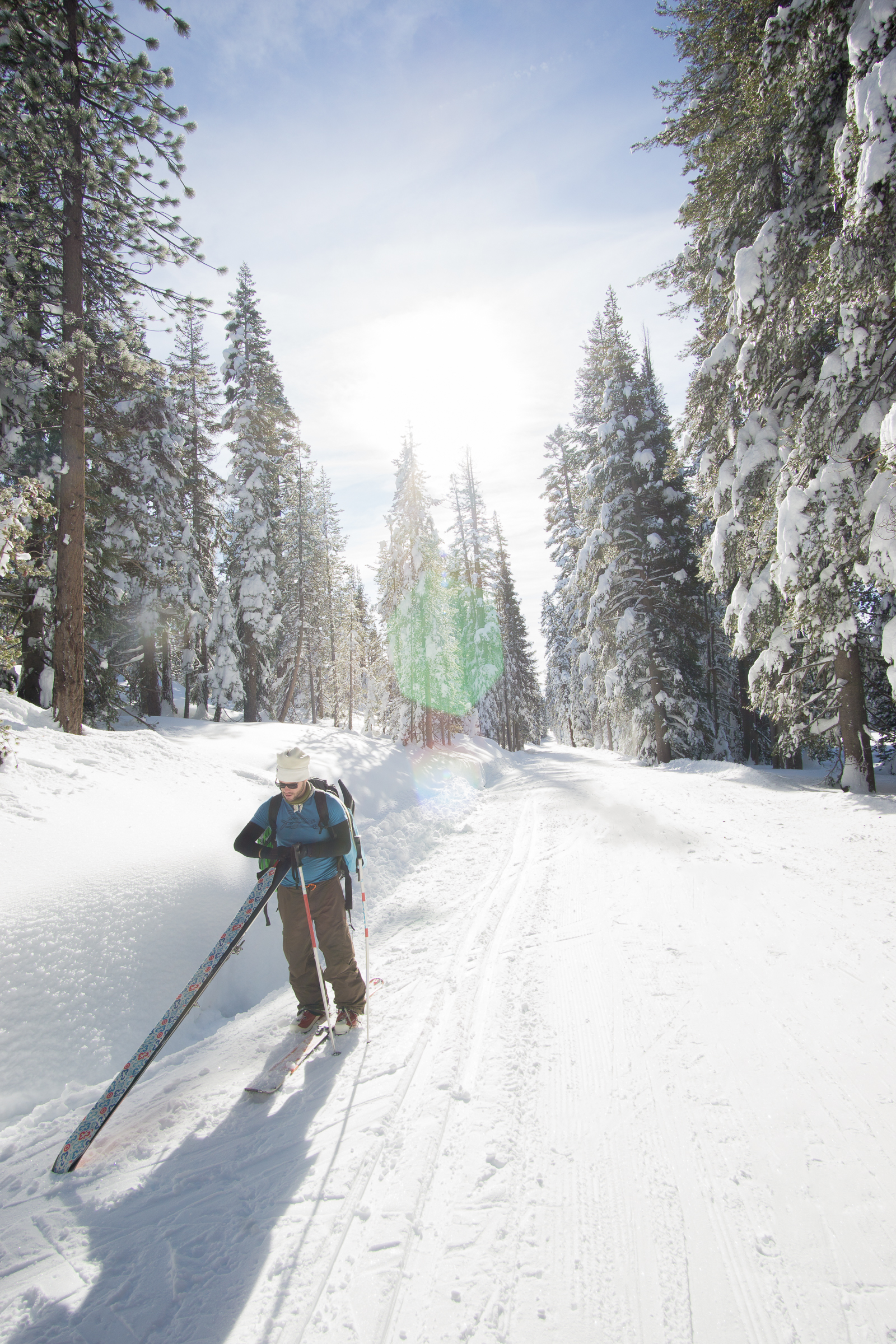 Strapping on the skins for another long day on the trail 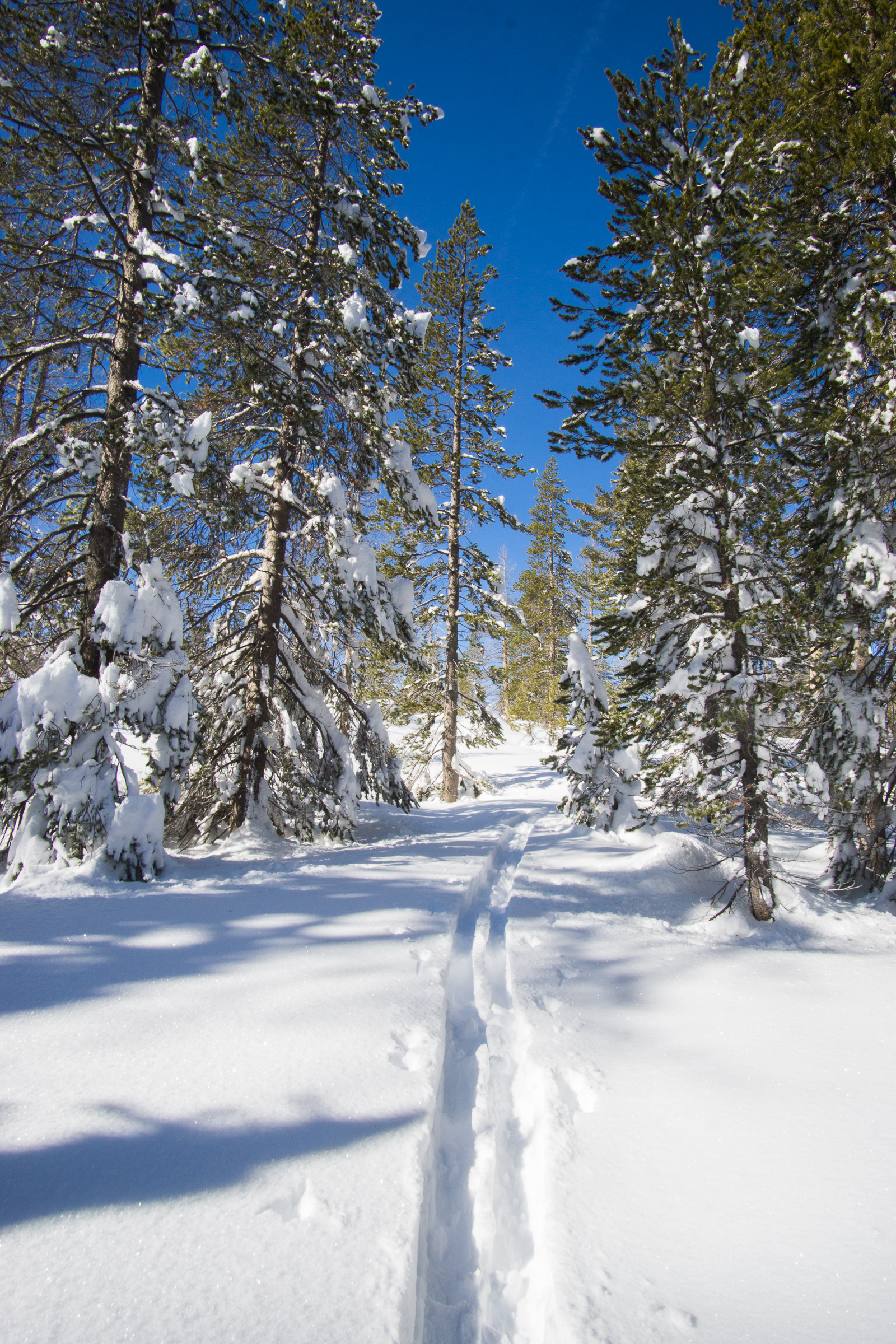 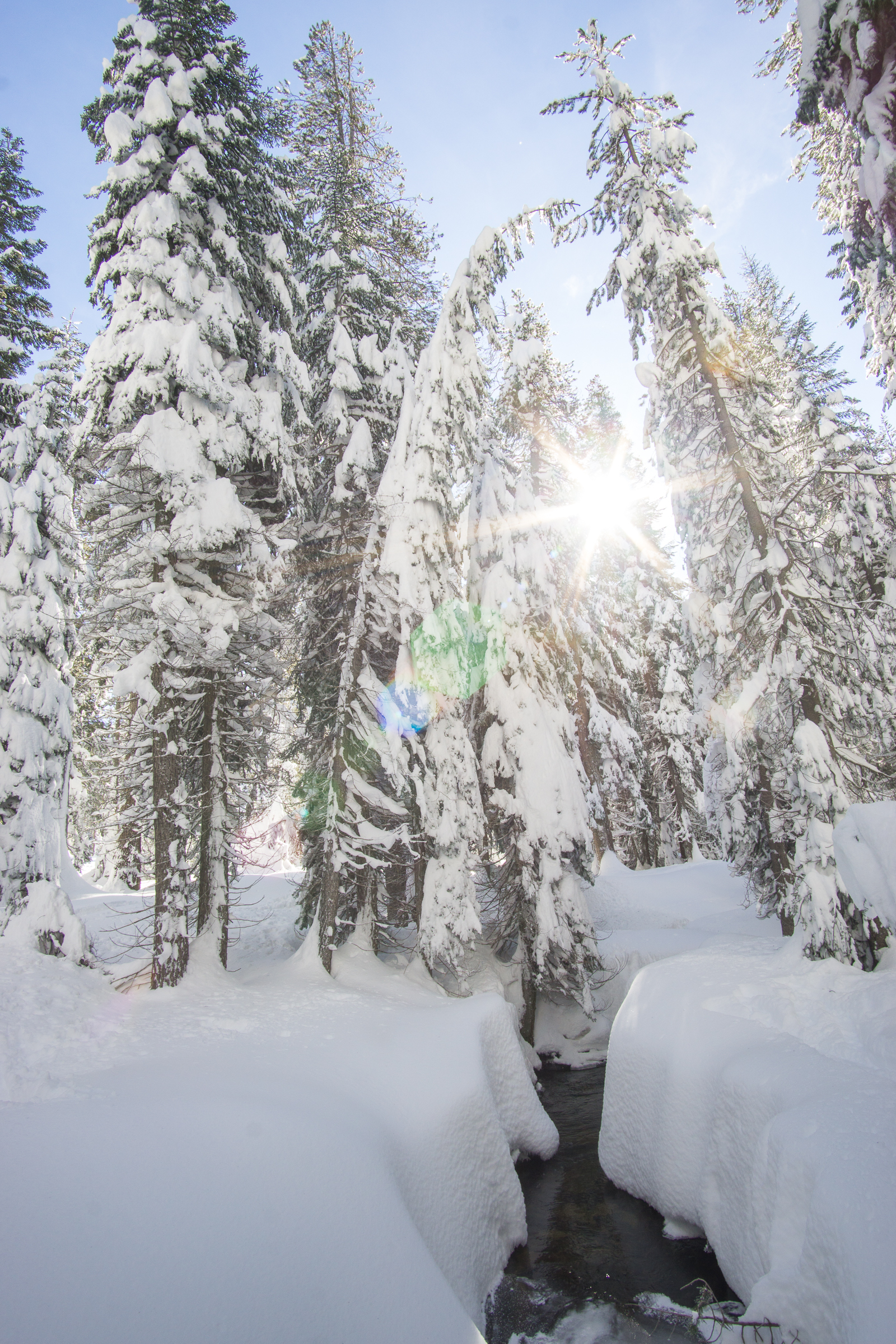 One of the many snow bridges crossed 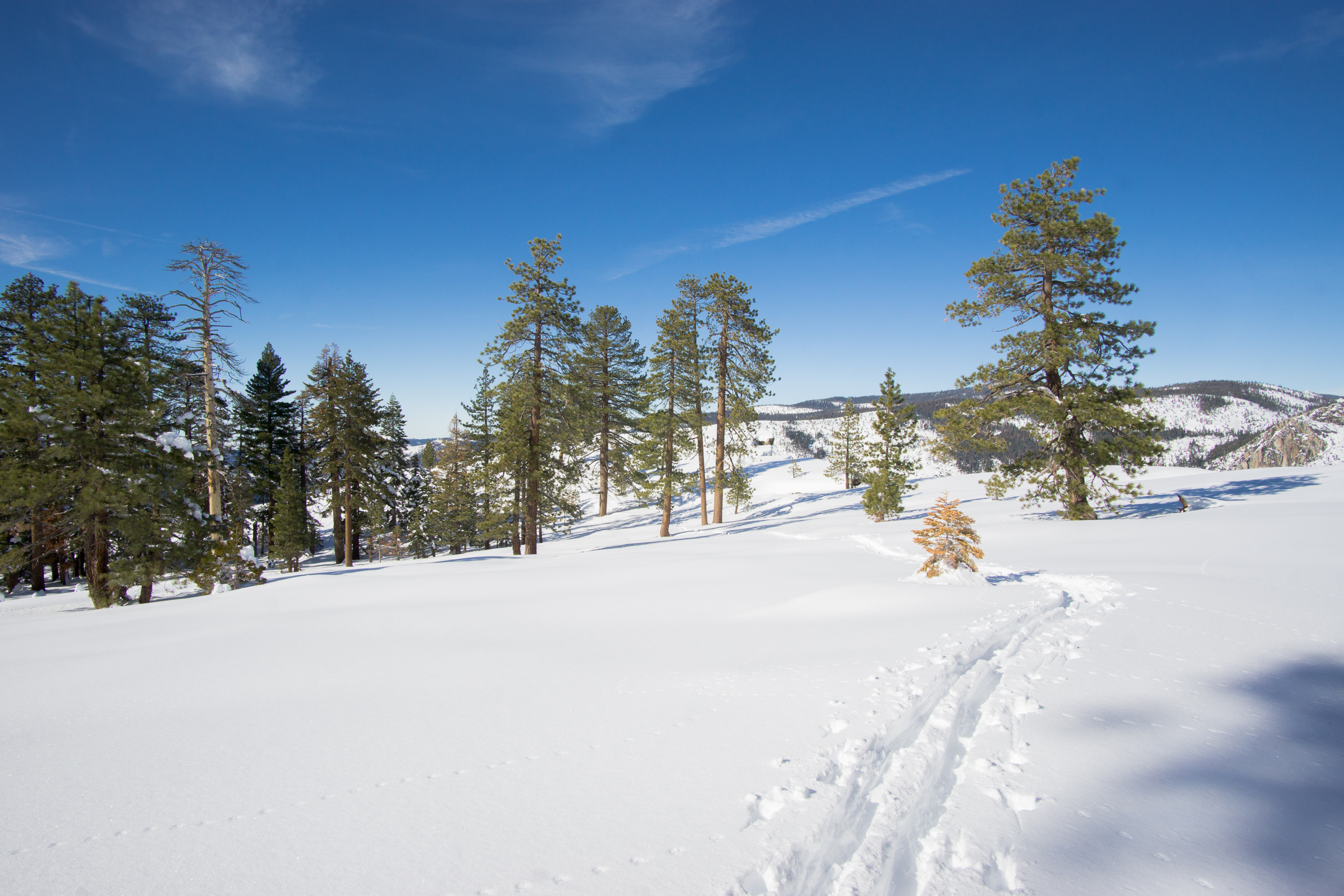 Final ski down to Taft Point – in the summer, this is all rocks and a foot trail

Taft Point pano; you can see the summer railing in the bottom right 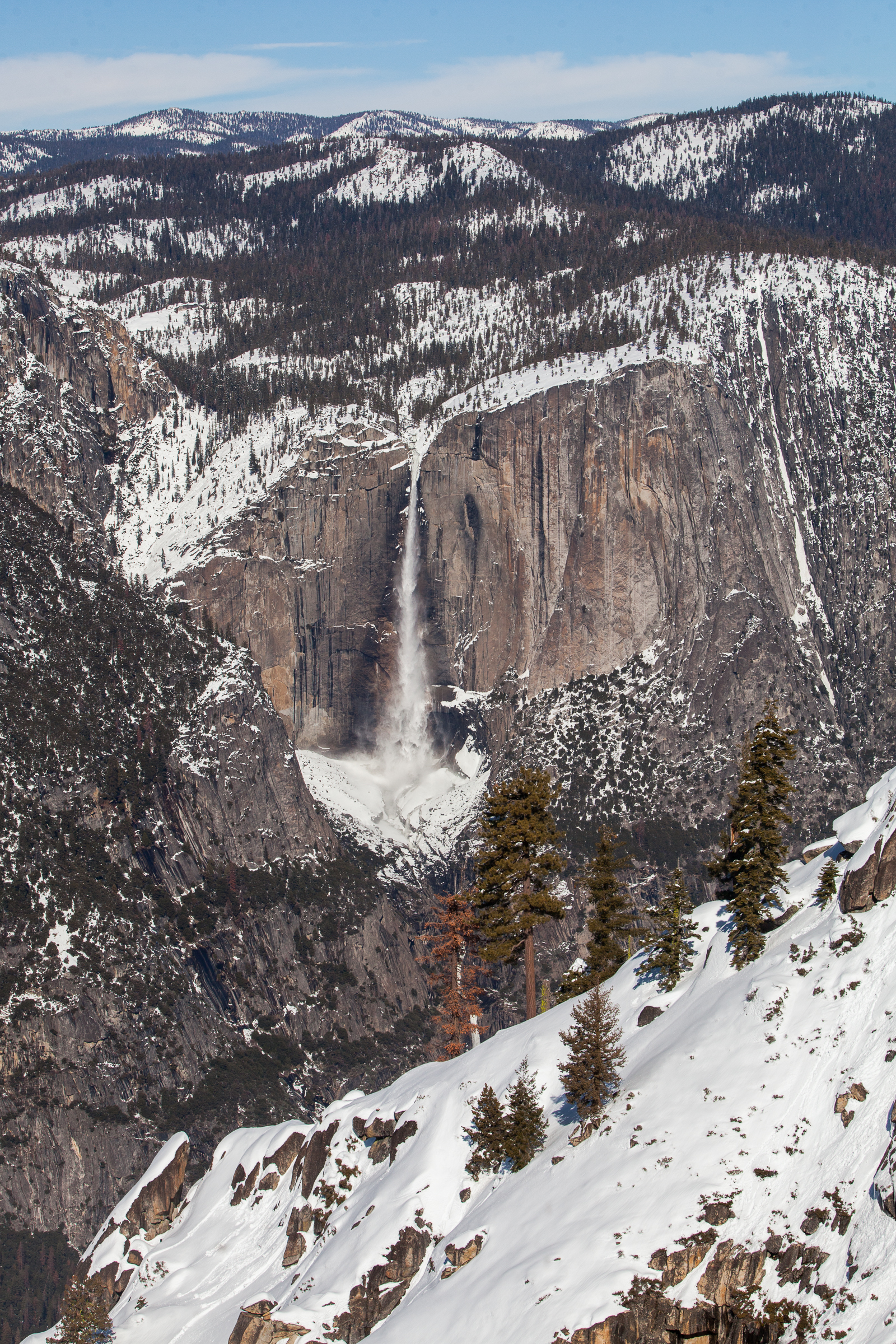 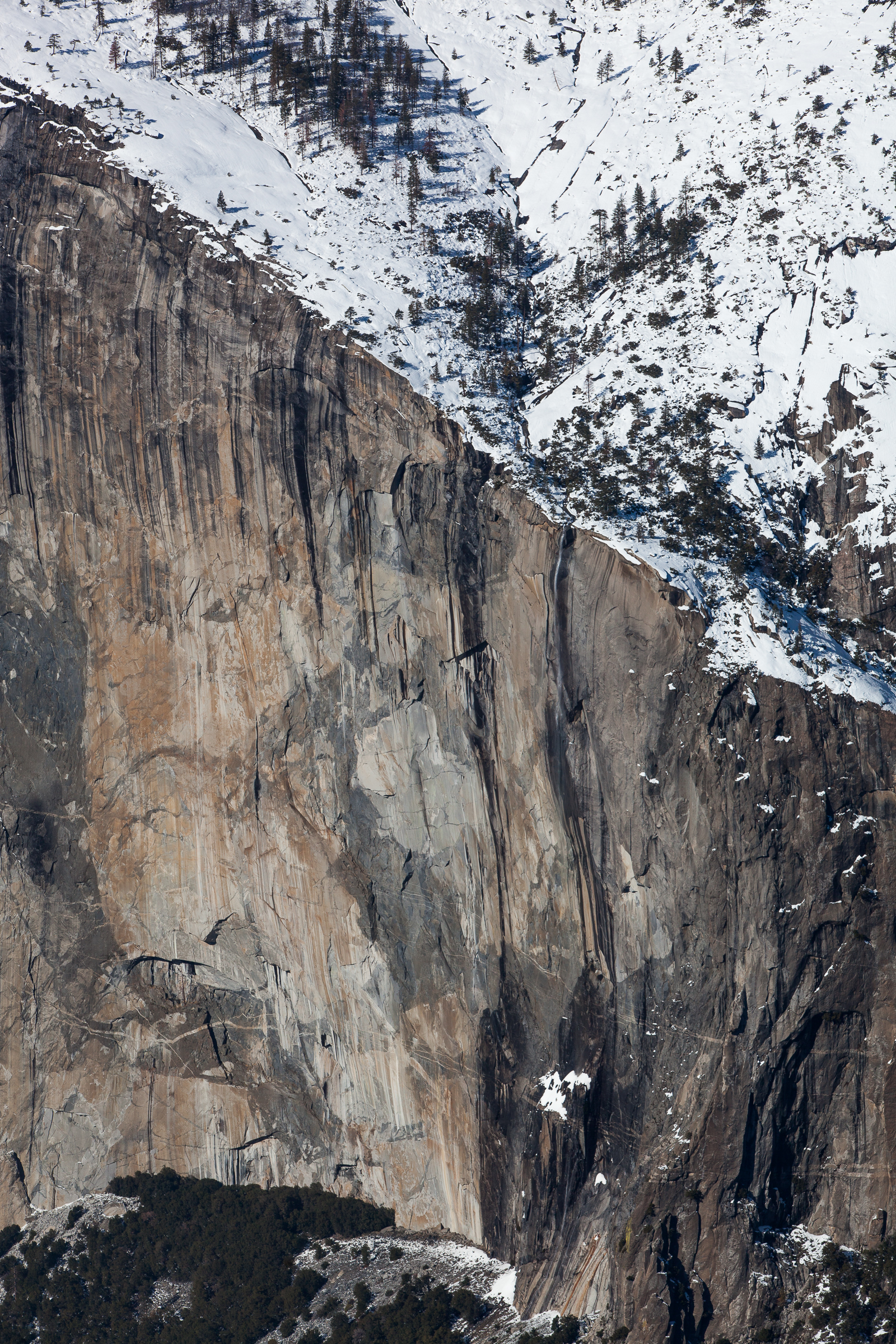 The famed Horse Tail falls, the star of the Fire Falls phenomenon 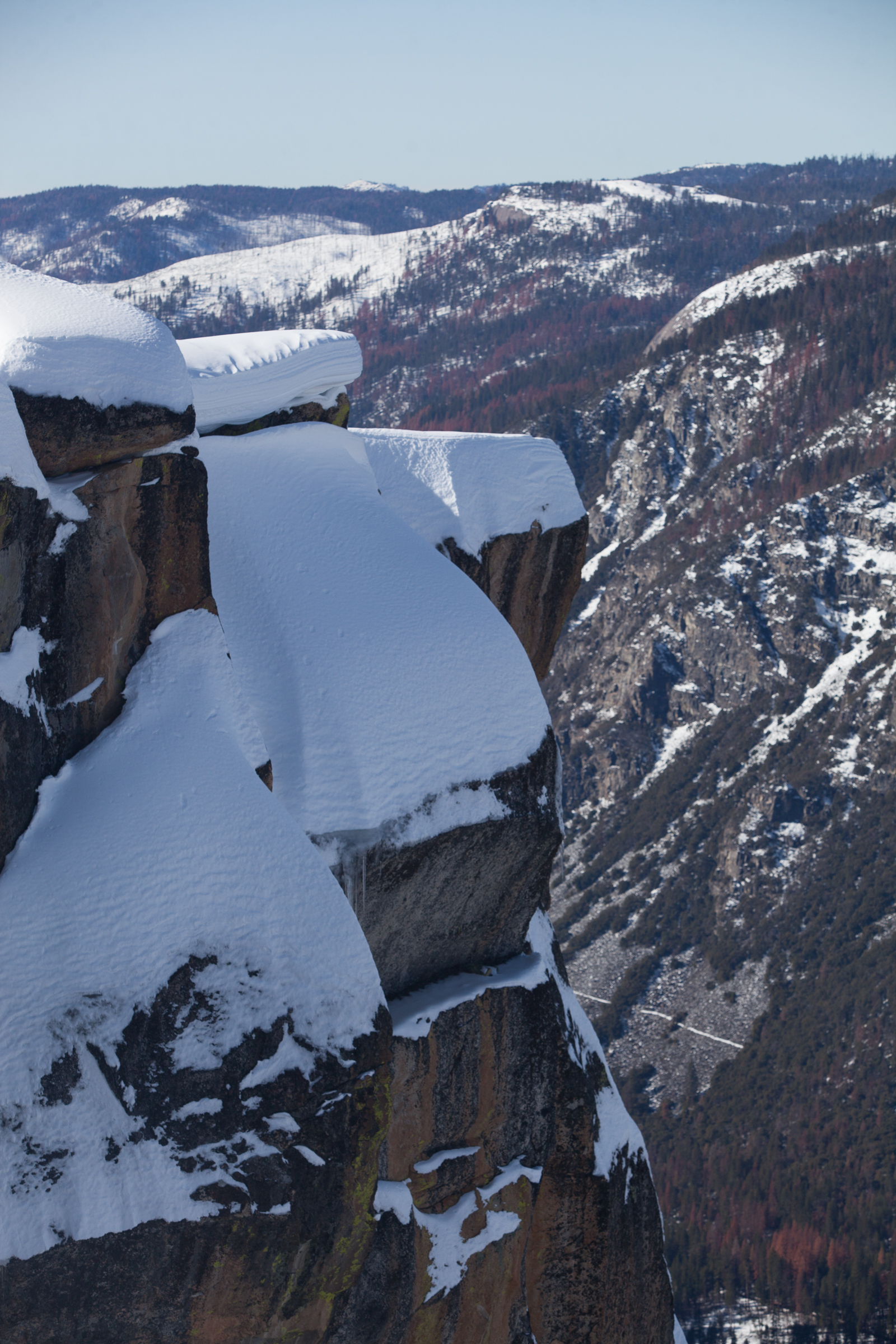 An untouched pile of snow of Taft Point 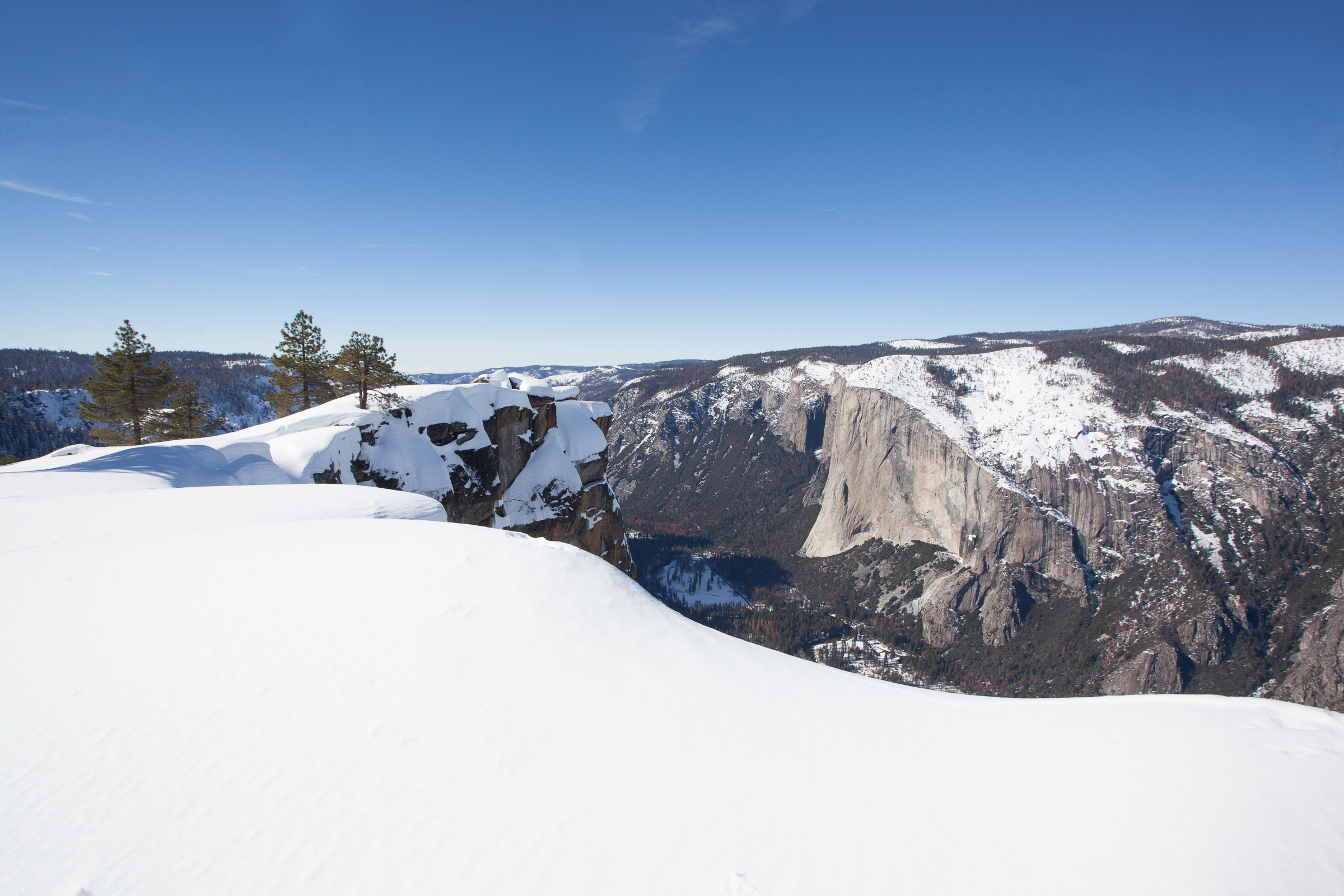 Back on the road, we quickly approached the summer trailhead for taft and sentinel dome and used the bathroom at the trailhead, and before we knew it we were at the last downhill mile to Glacier Point. Here, we were able to take our skins off and ski just about the entire road. There was one stream crossing where a crack in the road had formed, but otherwise it was smooth sailing. Tired and beat, our first views of Glacier Point was like a shot of espresso. We made it out to Glacier Point and set-up camp and were surprised to see other campers rolling in after us well past sunset. Being up here in winter is an experience like no other, especially after the historical winter we had. The amount of snow that covered Half-Dome and the high country was nothing short of special. There was so much snow up at Glacier Point that the railings were non-existent. The sunset did not disappoint at all, as we watched a snow covered Yosemite catch fire with the last rays of the day – the stark contrast of the bright red alpen glow against the snow made me totally forget about all the blisters on my foot. Once again, we slipped into our sleeping bags, drank hot apple cider to try and stay warm, and shivered ourselves to sleep. Did I mention the best part about winter camping is counting the hours at night until the sun comes back out? 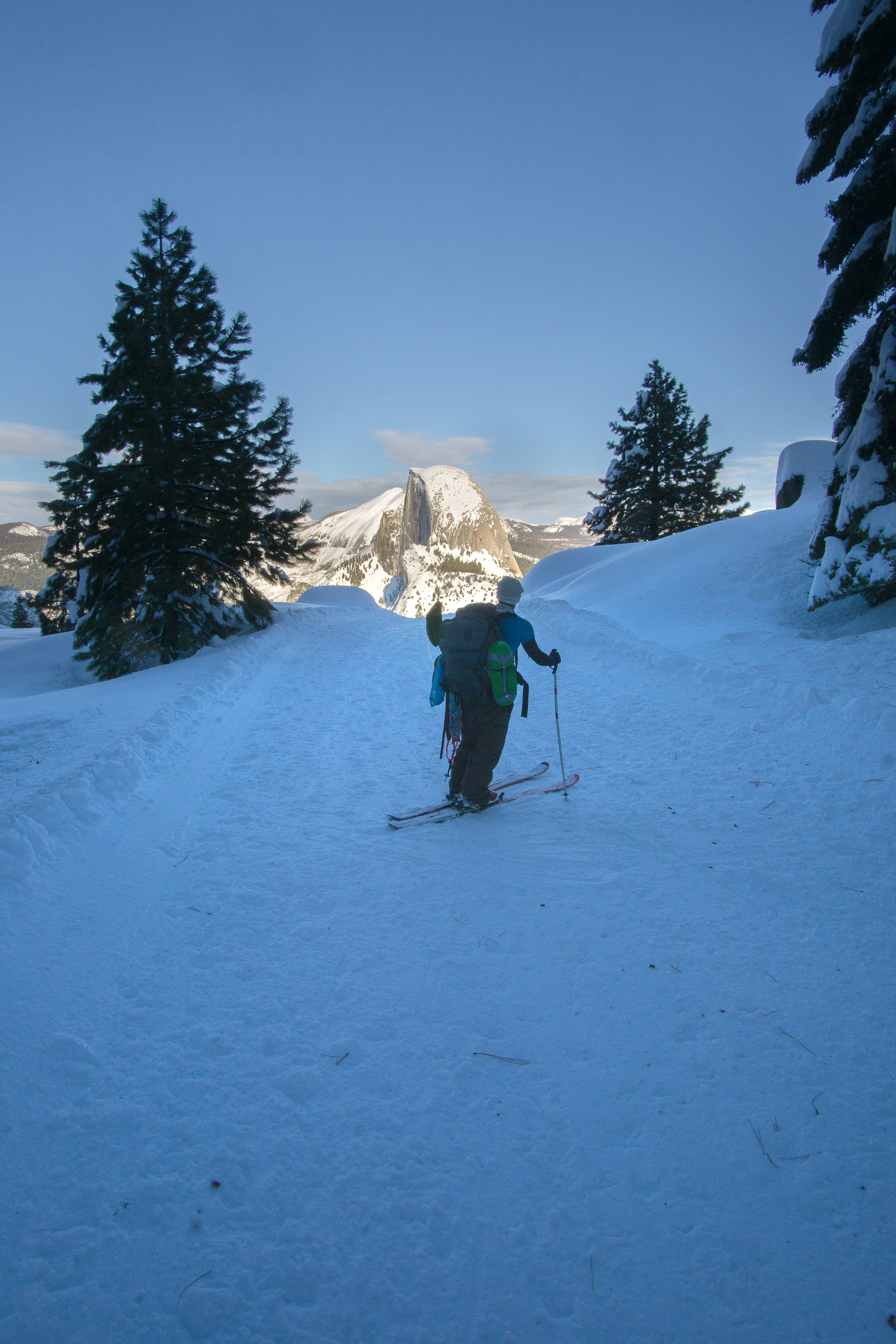 First glimpse of Half Dome 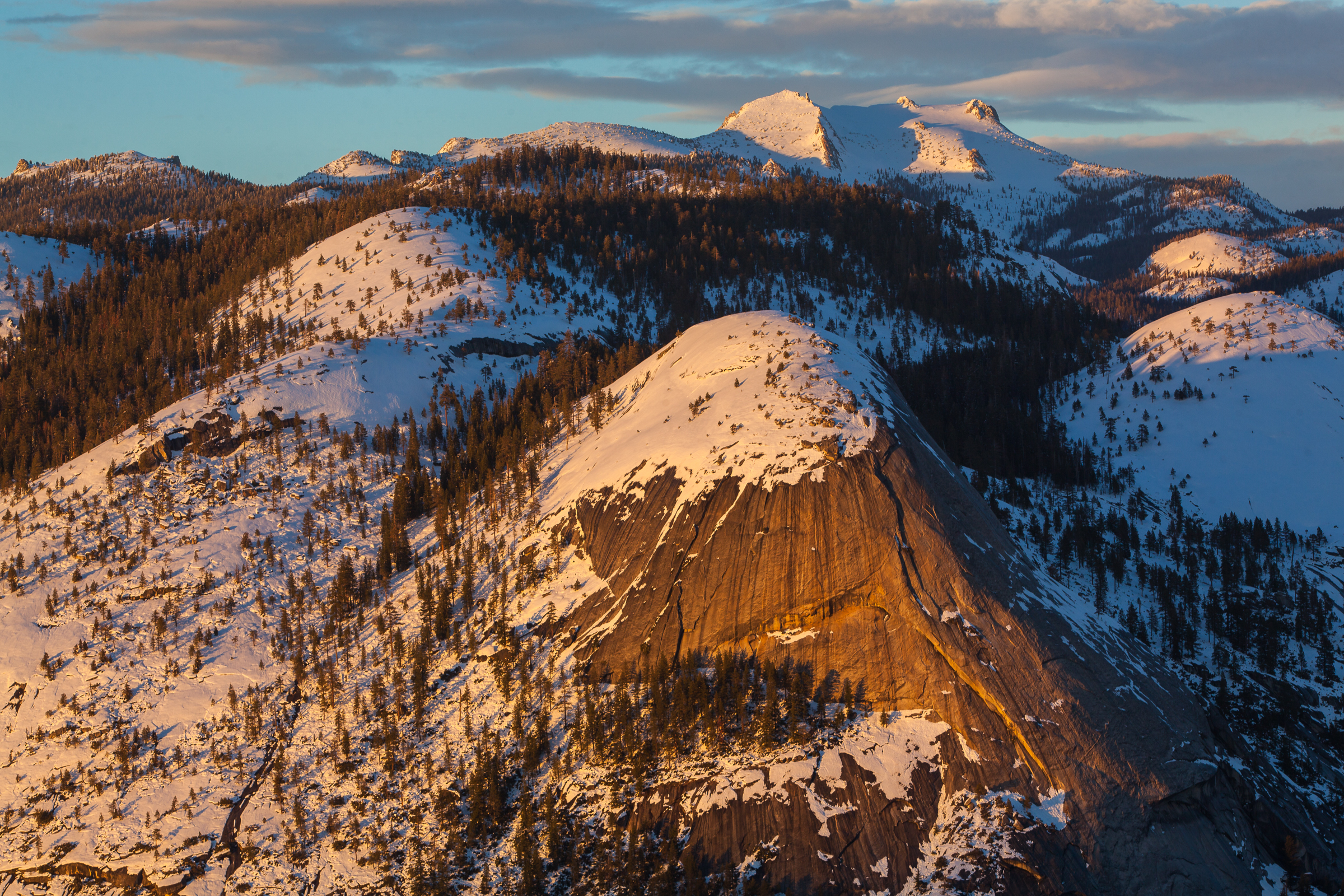 Last light on North Dome, Basket Dome and Mt. Hoffman (which looks like a razorback) 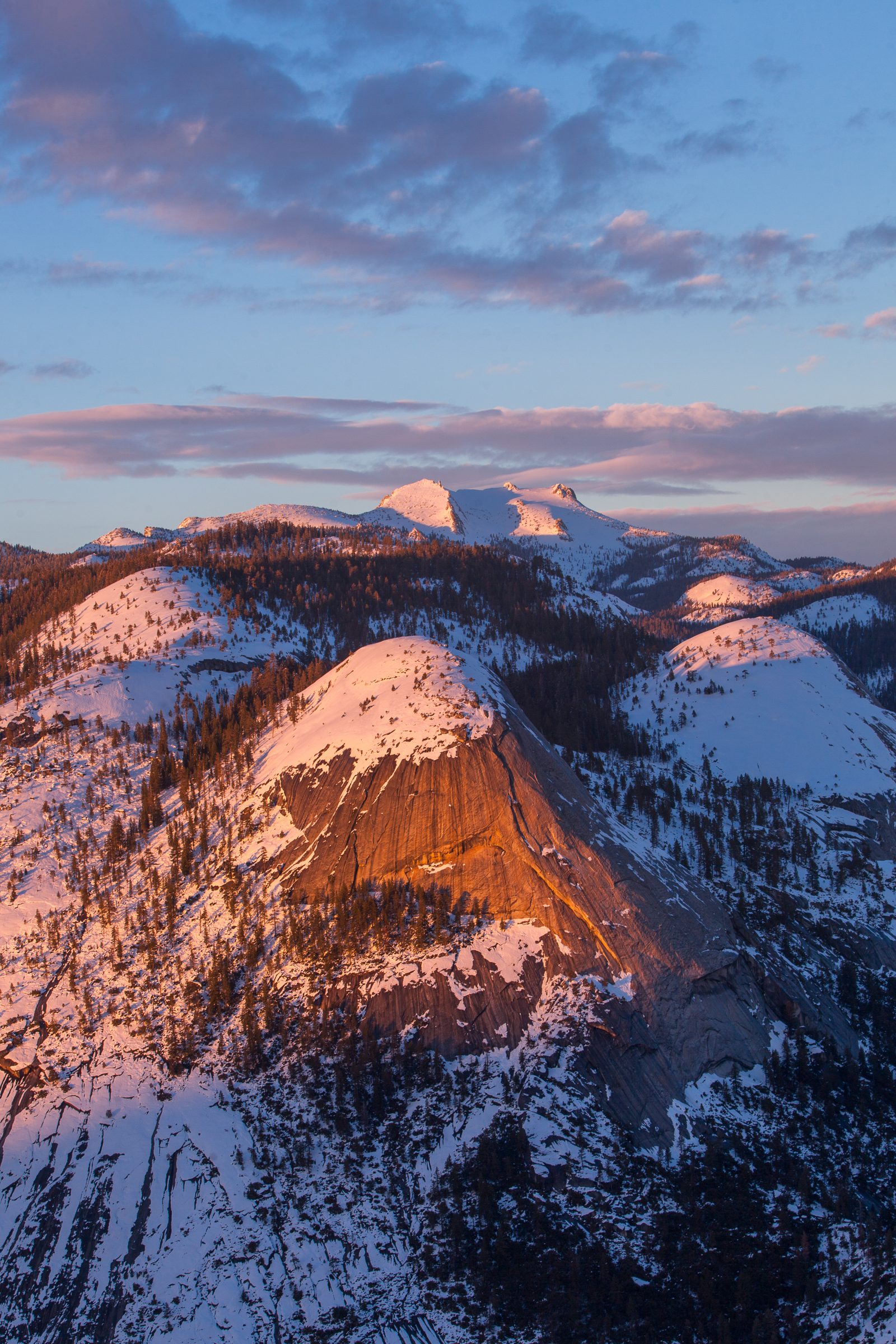 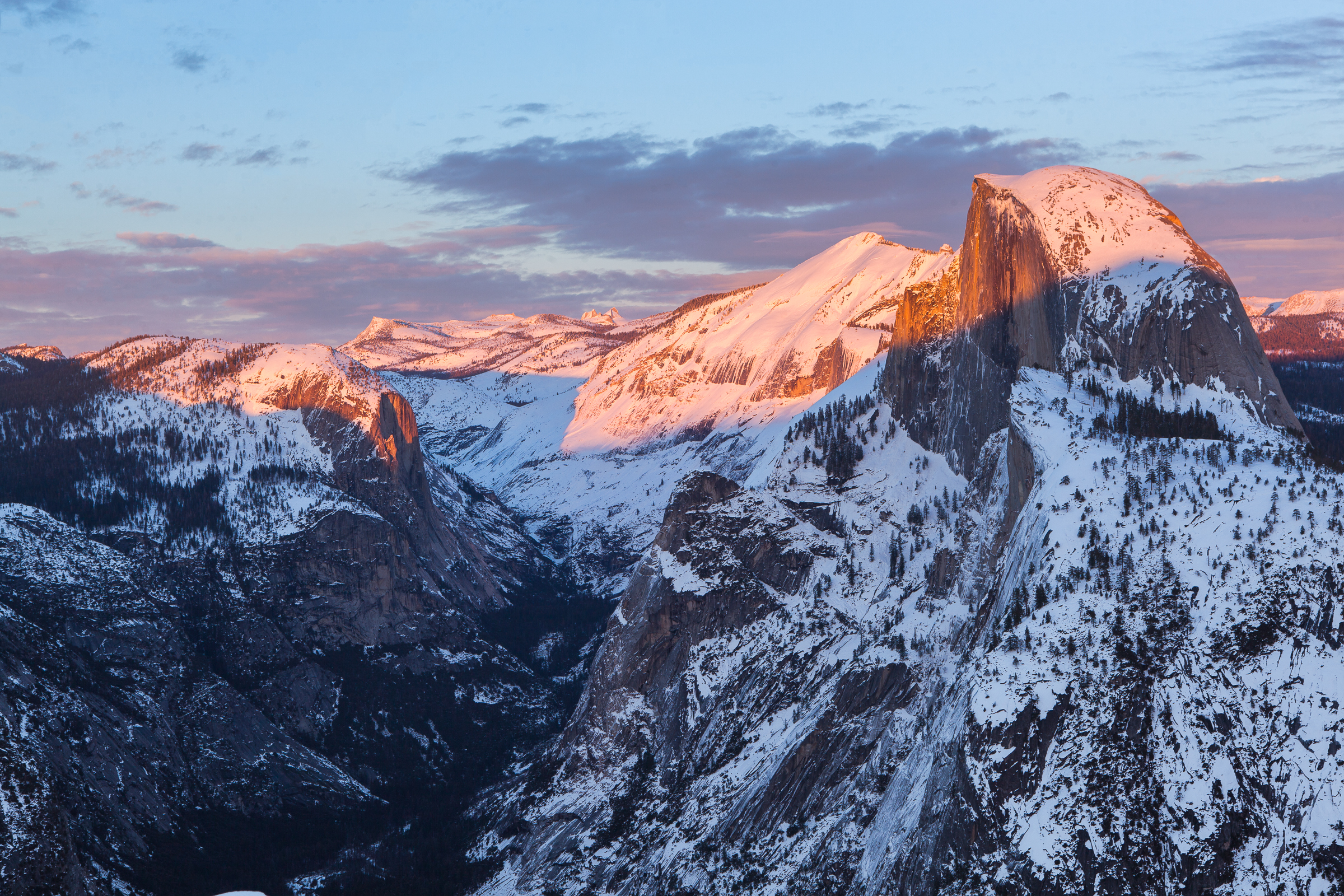 Last light on Half Dome, Cloud’s Rest and Tenaya Canyon 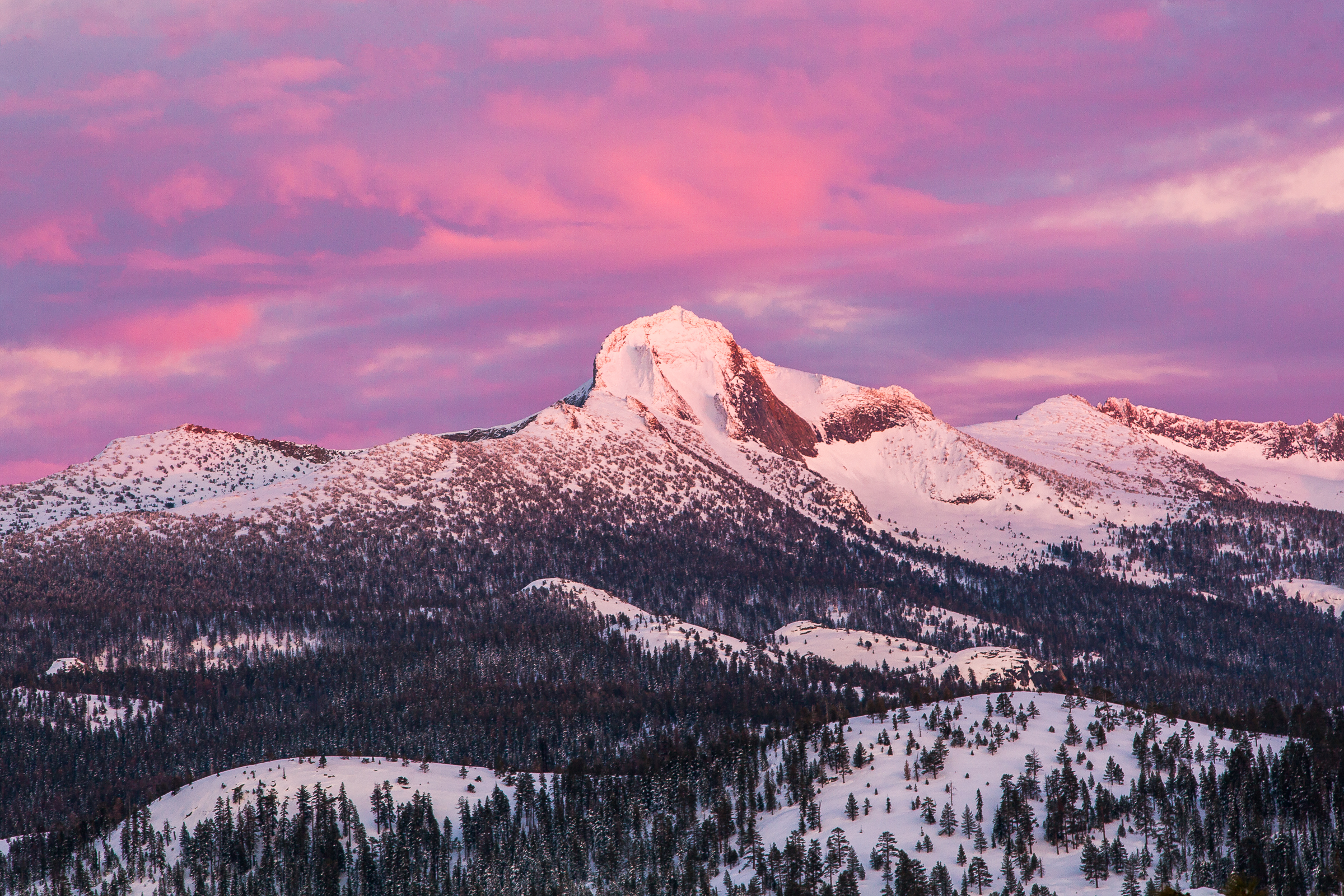 Cotton candy skies over Mt. Clark, one of my favorite mountains to photograph in the Eastern Sierra 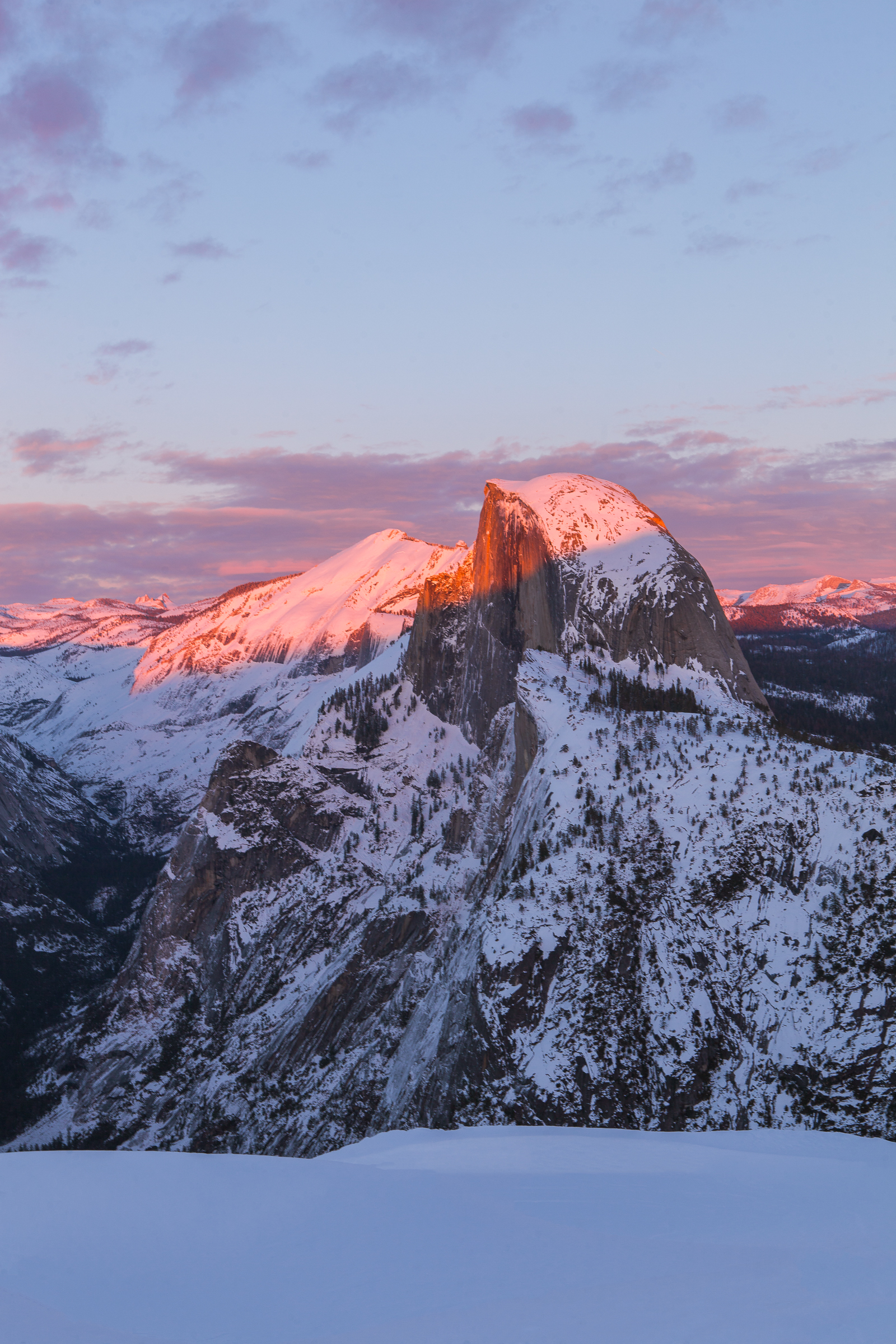 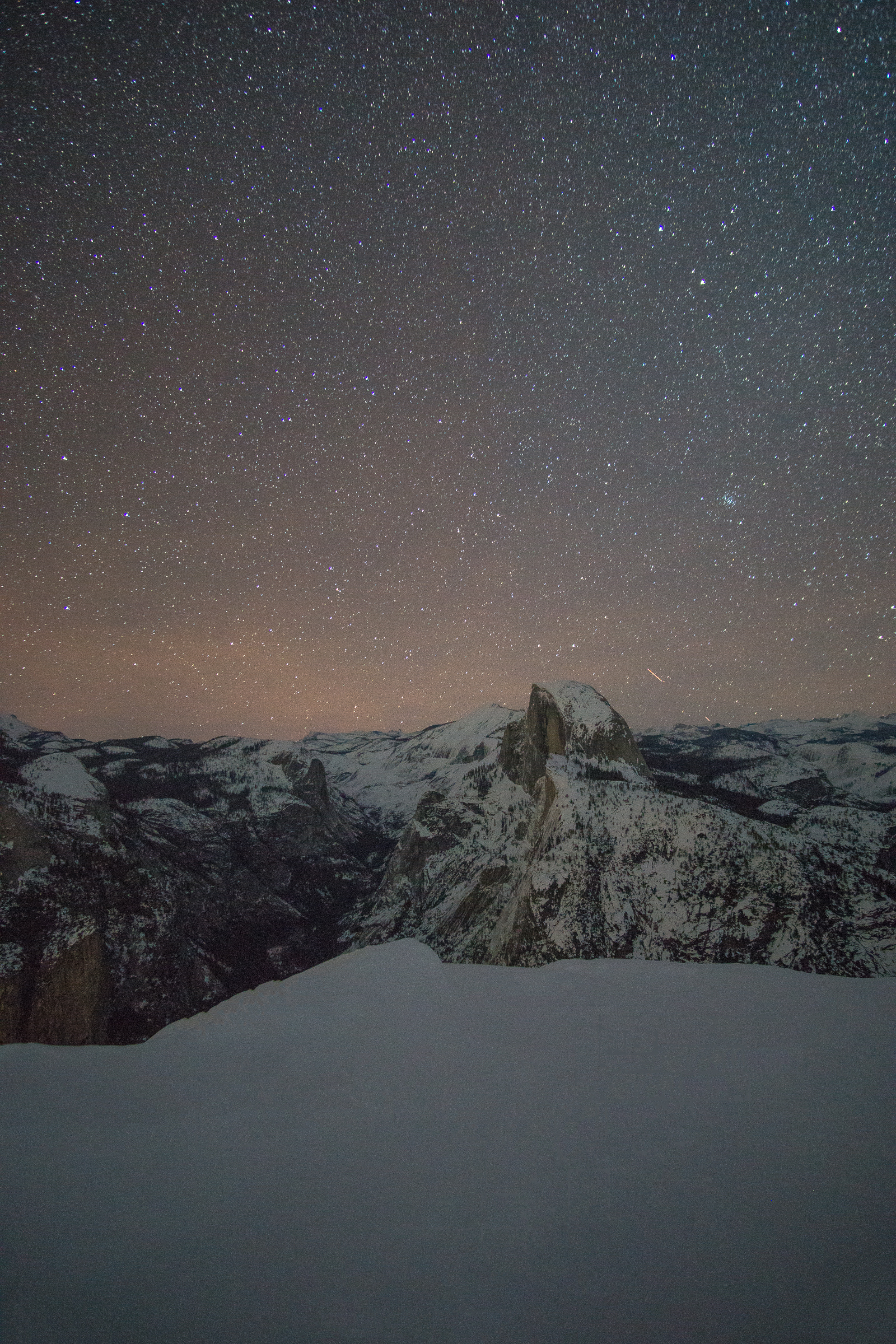 Winter sky over Half Dome 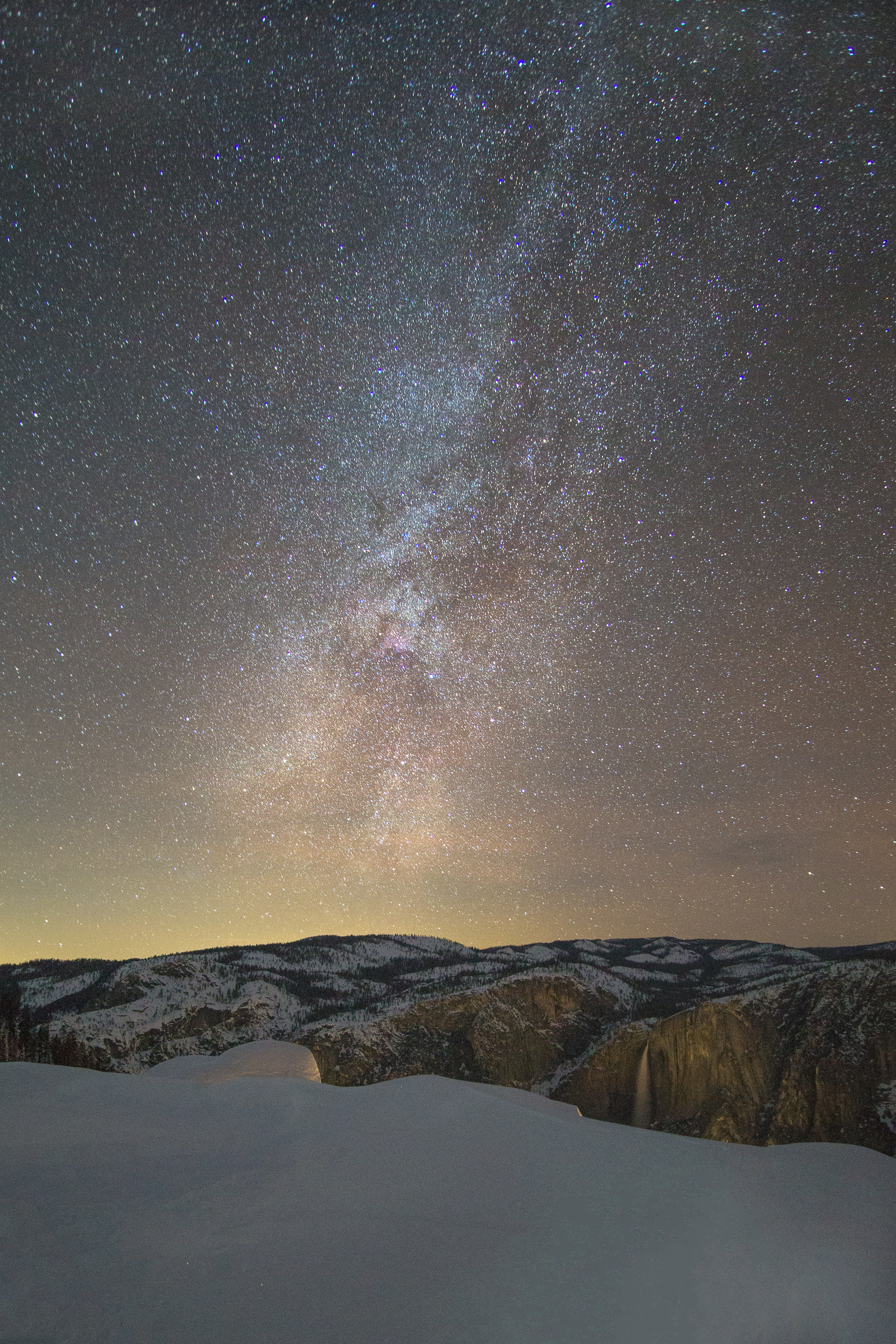 The next morning, I woke up to a gorgeous sunrise. After shooting, we ate breakfast and tried to use the restrooms at Glacier Point only to find the doors covered by snow., requiring us to dig the doors out with our shovels. Once that mission was over, we set back off on the return trek, dreaming of that long uphill portion that killed us as it was now going to be a nice long downhill ski. Even with that excitement, the moving was slow and we were beat. When we finally hit the downhill portion, we ripped the skins off and flew down the road, passing all of the people heading uphill on their cross-country skis. Once the fun was over we swapped back to skins and continued the trek. The going was slow and I even entertained the idea of calling it quits and setting up camp till the next morning, but with no food this was never really a serious thought. I basically crawled my way to the end until we pulled the skins off about 1/2 mile out and skied the rest of the way back to the parking lot as the sun set. In my delusional state, I didn’t notice that the skin for my skis had fallen off my bag – thankfully, some awesome people who were walking behind us picked them up and found us in the parking lot. 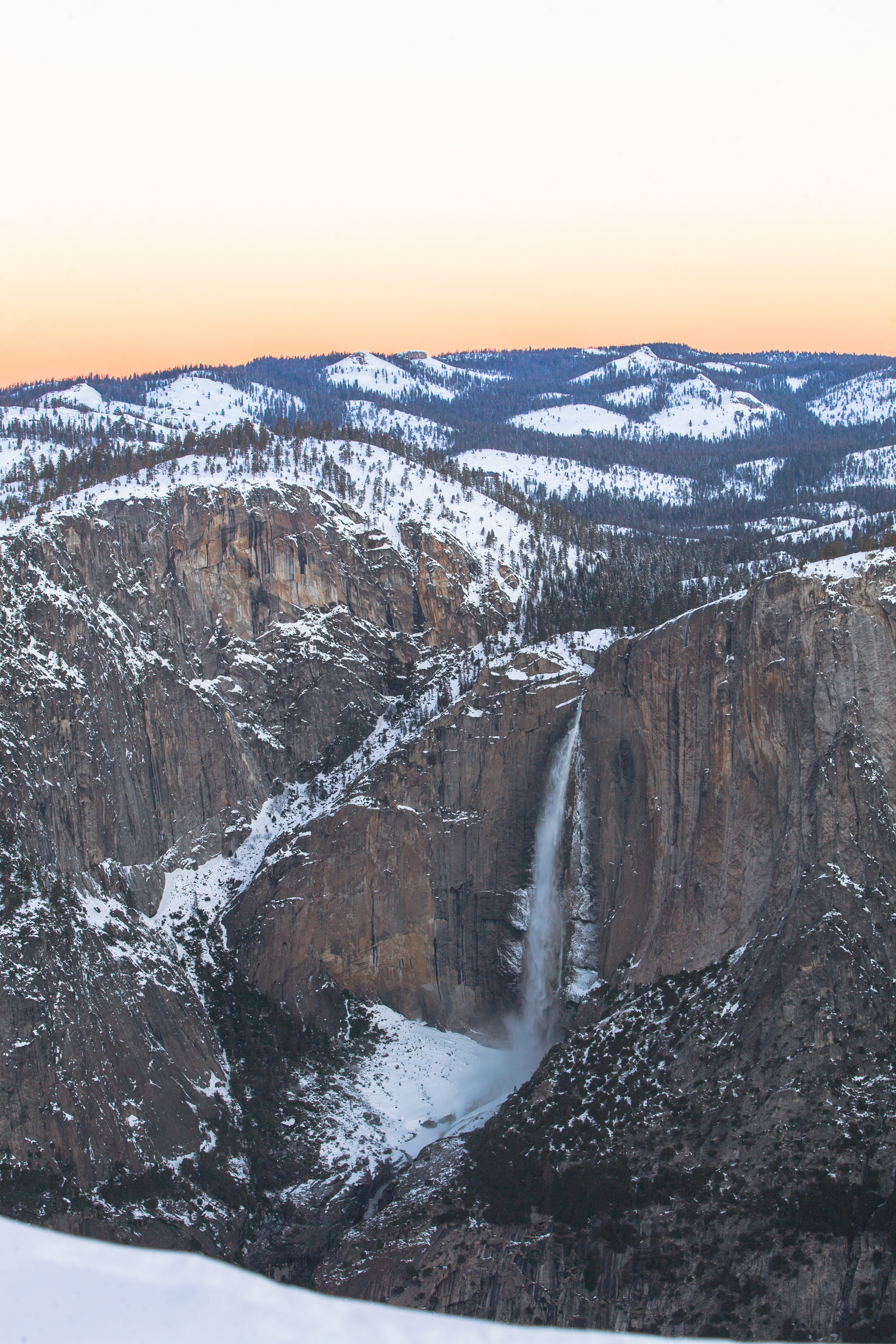 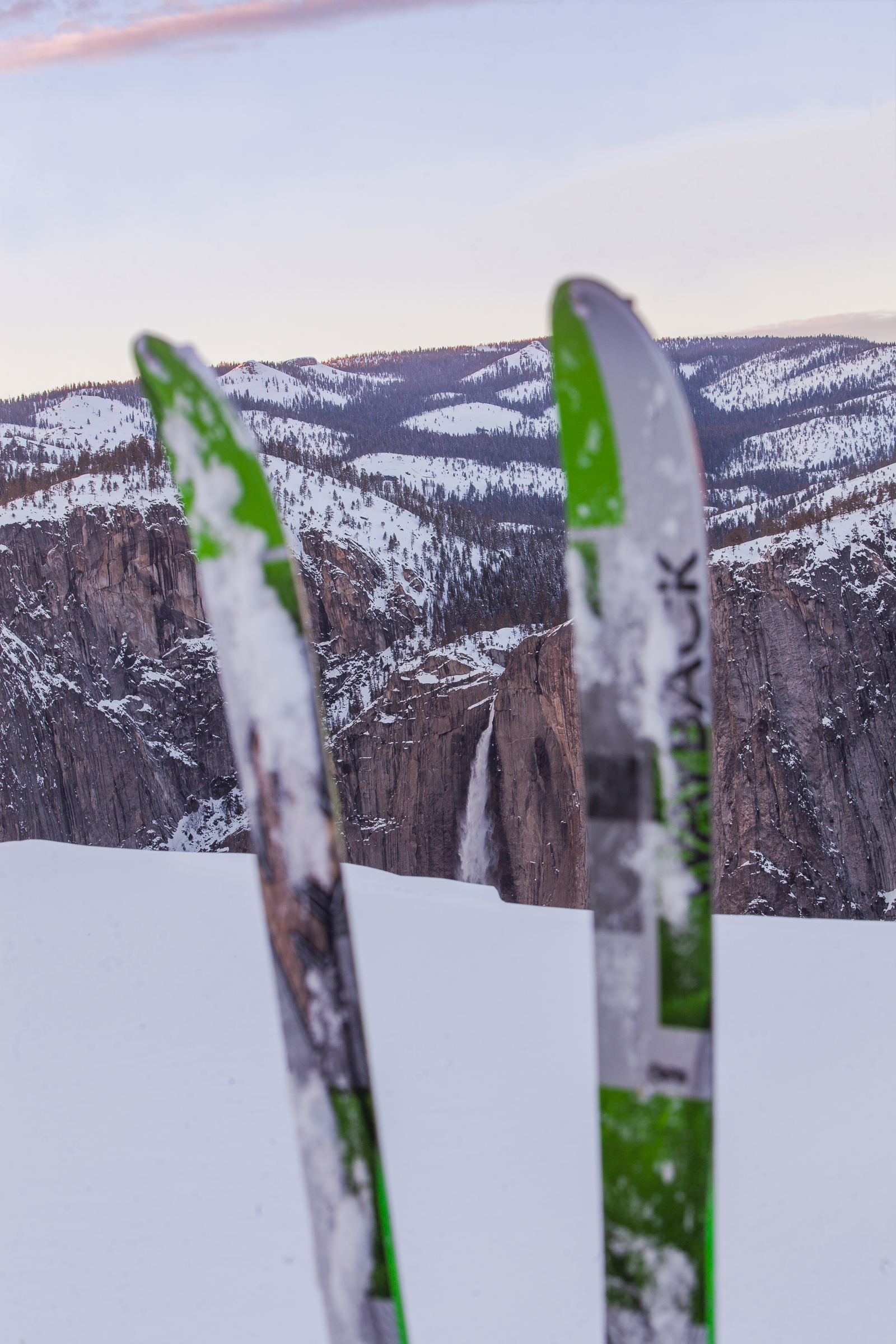 Sunrise on Yosemite Falls, framed with my skis 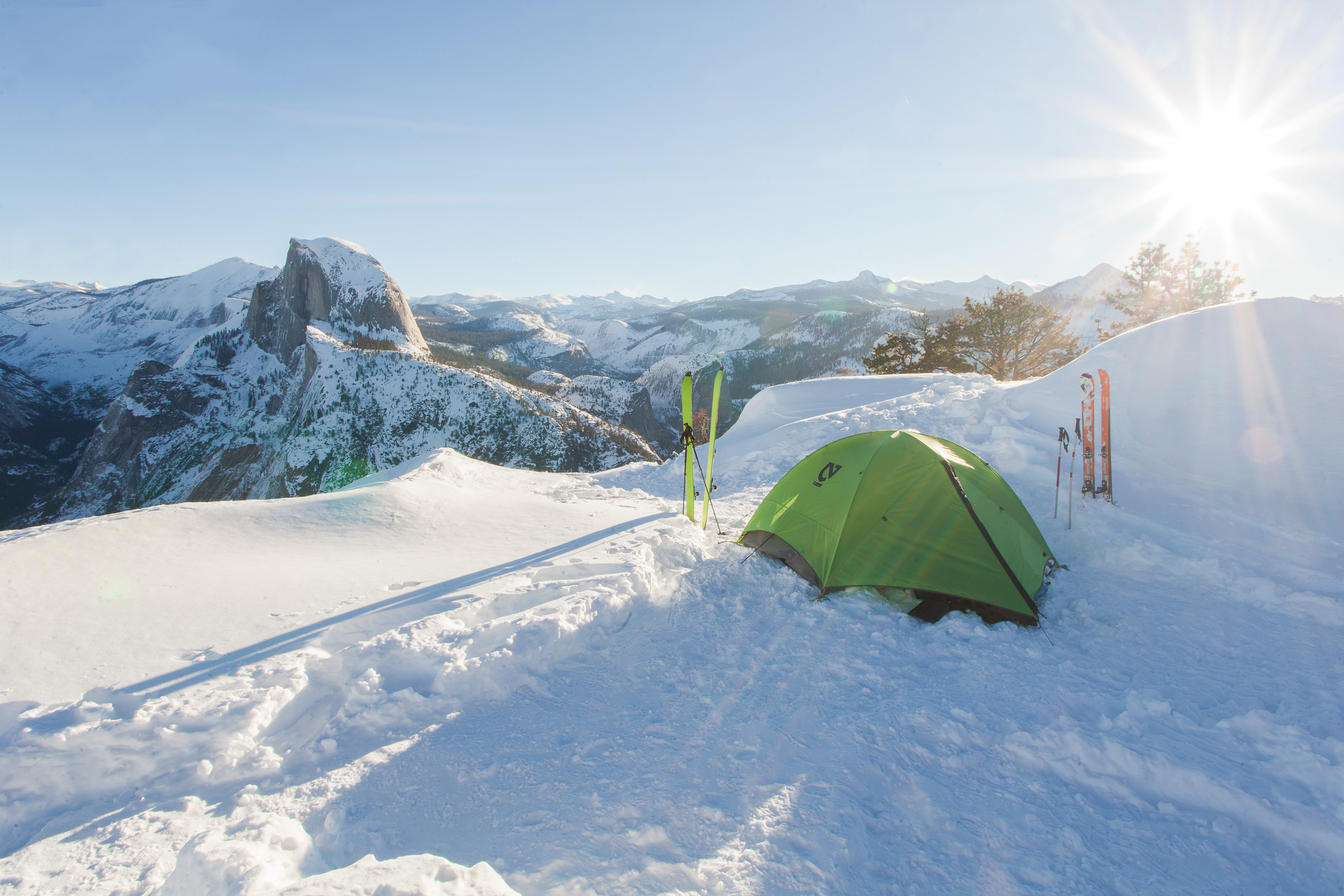 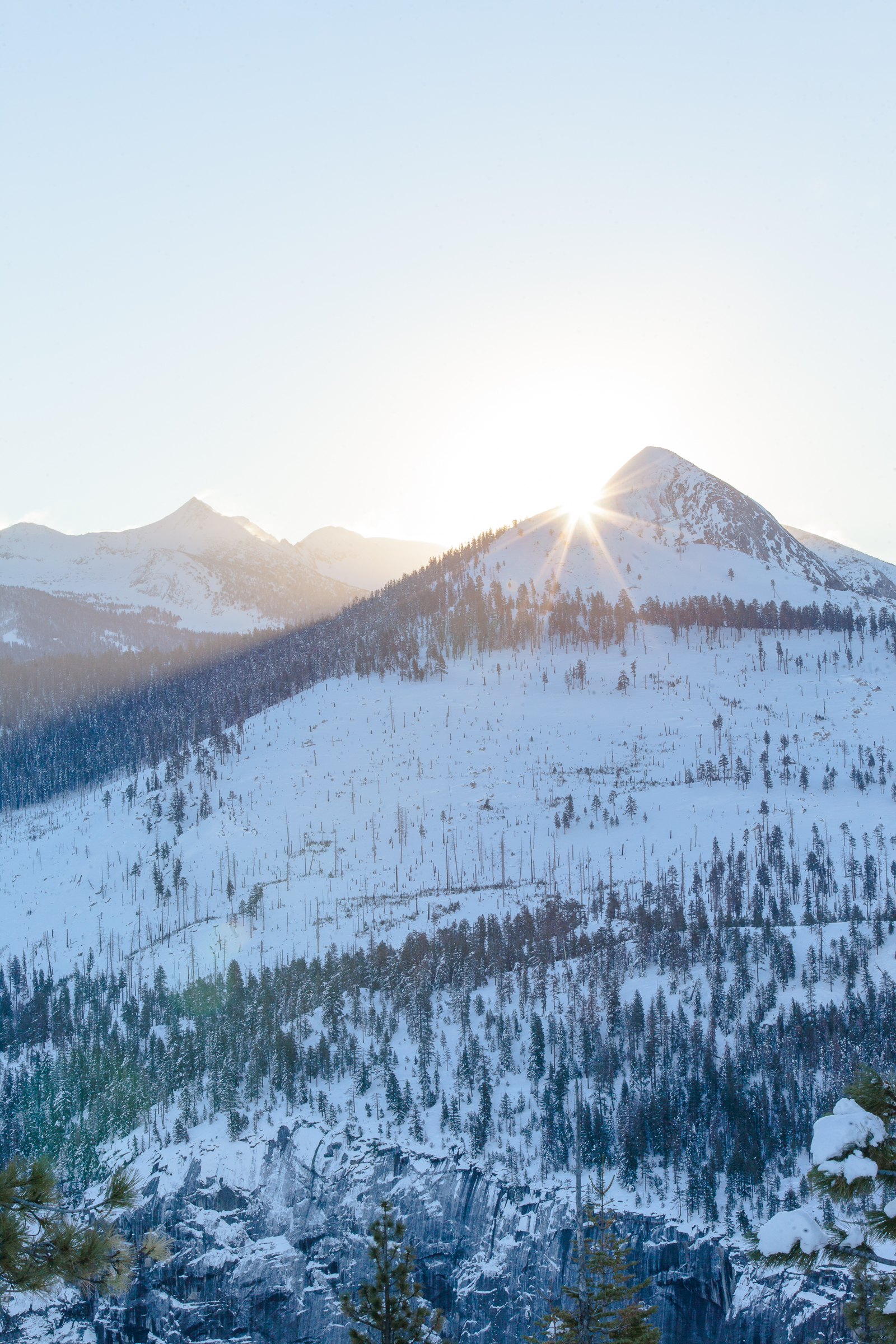 Day breaks over the mountains 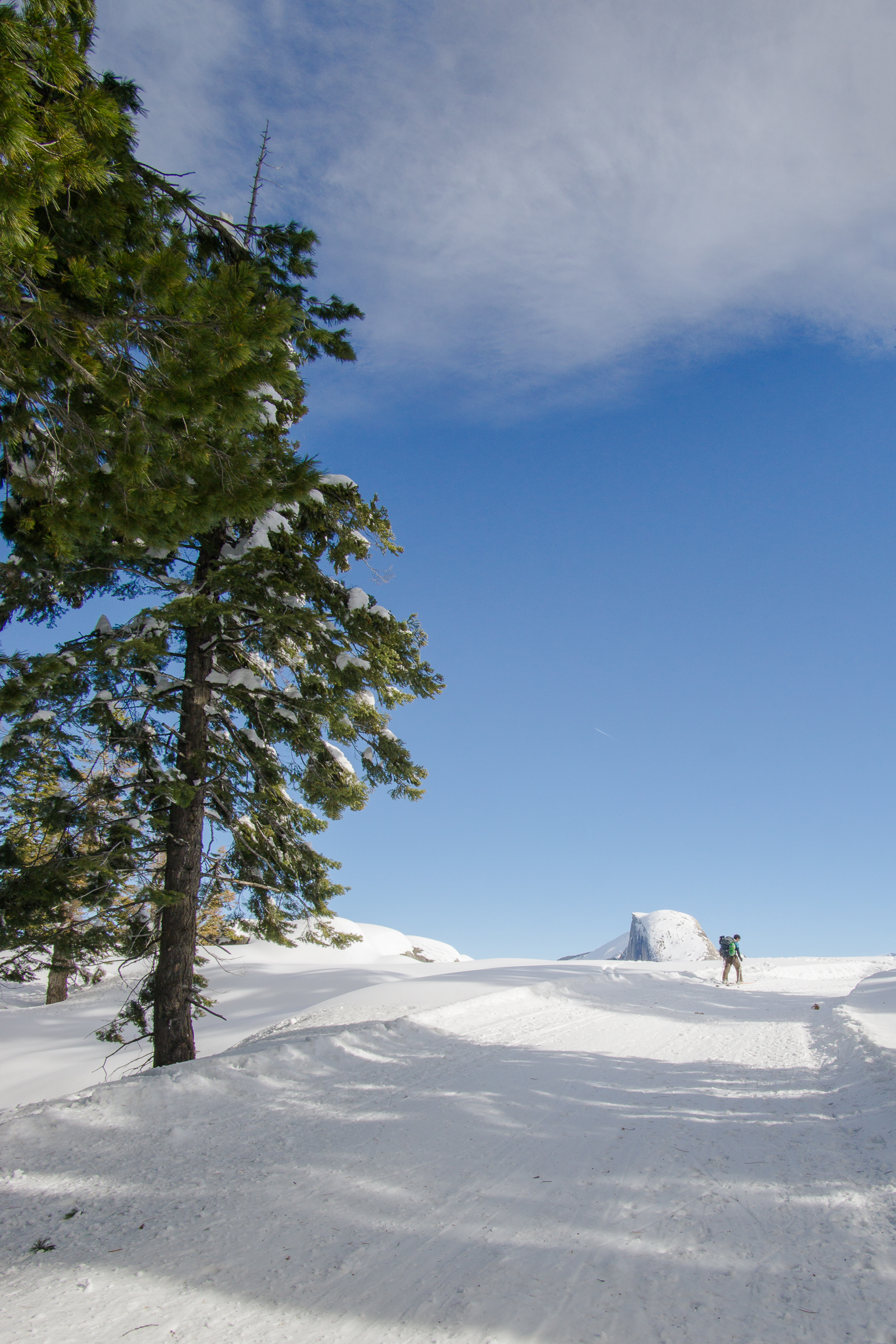 Starting the trek back to Badger Pass, one final look at Half Dome

Relieved to be back, we laughed about the torture we had put ourselves through without even really skiing all that much. But in the end the views were beyond comprehension and we experienced Yosemite like we had never before, and probably never will again. We piled into Dan’s car and cruised back down the hill to where I left my car, hoping the whole time it was still there. When we arrived, the car was thankfully still there. Attached to it, however, was a warning from the police stating that if the car was not moved by 11:00am on Monday it would be towed. Thankfully we didn’t decide to stay another night out, or that would have a whole other adventure.